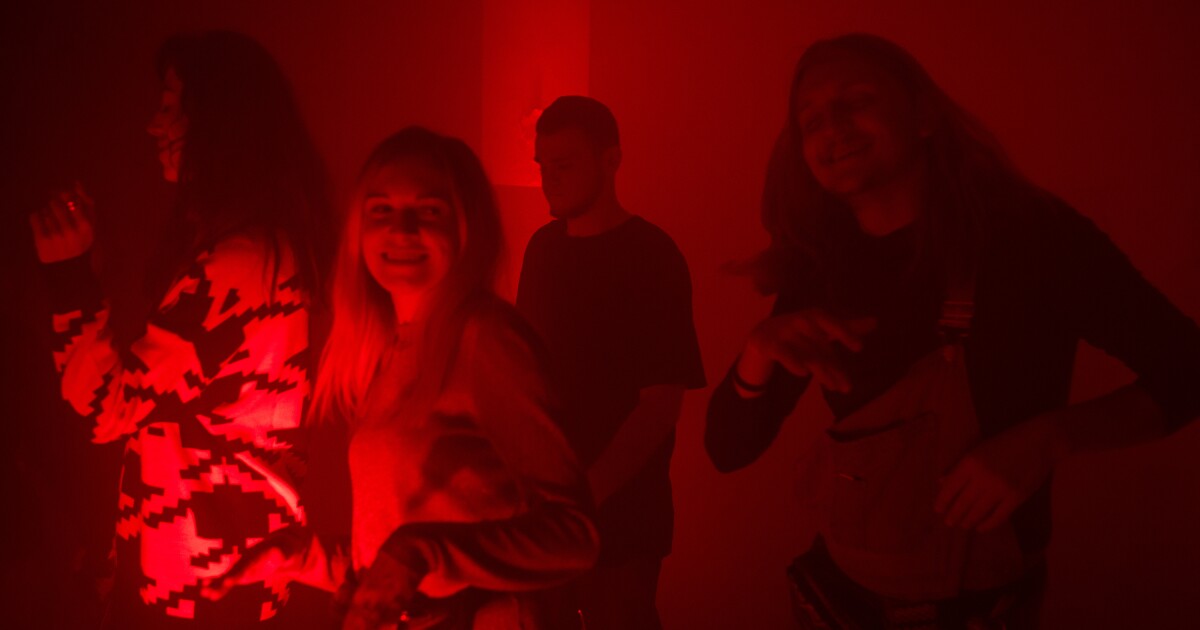 KOLYCHIVKA, Ukraine — Hanna Yurchenko carries a basket full of freshly picked apples from nearby trees. It’s a drizzly afternoon on one of the first cool days of fall.

The 66-year-old walks around the perimeter of what was once her home – reduced to the foundation by multiple rocket attacks on March 7 – and distributes apples to workers who shovel the debris into metal buckets.

“I’m retired and I can’t do this cleaning myself,” she said, her eyes filling with tears. “I am so grateful for these children.”

The “kids” she refers to are a dozen people between the ages of 20 and 30 cleaning up the rubble. It’s a dark setting, but the vibe is light: techno music blares from a Bluetooth speaker and people dance and laugh as they work.

They volunteer for Repair Together, a large network of friends who raise money to bring busloads of young people from all over Ukraine to destroyed villages, to help people clean up their homes.

Organizers say another goal is to restore a sense of community after seven months of war.

Today they are in Kolychivka, a village near the northern city of Chernihiv, which Russia bombed at the start of the war.

Roman Tarasiuk, 27, dances atop a trailer parked out front as he empties buckets of debris to transport. He worked for a large educational company in Kyiv but lost his job when war broke out.

“Volunteering in Ukraine has become an everyday way of life. We all want to feel useful,” he says.

Viktoria Sitovska, 20, sways to the sound of music and nearby shovels. She was born in Ukraine and goes to school in Germany. Since the start of the war, she has returned to Ukraine during school holidays to help.

She says the festive atmosphere is necessary.

“Right now, we’re all feeling anger and a lot of destructive emotions. Listening to music keeps us balanced, so we can keep working,” she says.

The cleaning events were born from this idea. A few friends got together to help out in another village earlier this spring. But there were so many places that needed help that they invited other friends, who invited other friends. Now organizers say thousands of volunteers have helped out at the events.

“The scale of the destruction is so huge,” said Marina Hrebinna, 34, one of the organizers. It can be easy to get overwhelmed by it all, she says. The group tries to focus on what is possible, on the difference they can make for individuals in individual villages.

And they try to make it memorable, usually by camping nearby. They work the weekends and organize dance parties at night to let off steam after days of hard and emotional work.

“Some people say, come on, you can’t have fun, it’s war! But I say, we’re doing something right. Why can’t we have fun too?” asks Hrebinna.

At the end of the street, a boombox perched on the foundations of a destroyed house plays Ukrainian pop music. Two young people are throwing bricks at each other, piling them up as they go.

Tetiana Vereshchahina shovels alongside the volunteers. It was his family’s home.

“It was a surprise,” she laughs, referring to the volunteer effort. “I didn’t know!”

Vereshchahina says she asked local authorities if she could borrow a trailer to transport the debris. Instead, she found a whole team coming to help her.

Her nine-year-old daughter, Anastasiia, jumps and dances nearby. She prepares tea for the volunteers, to help them warm up.

“There are seven days a week – five of those days when we read the news and get really sad. And two days a week we get together and get distracted with work,” she says.

A few steps away, in front of cows grazing by the side of the road, Kateryna Yurchenko, 60 (no relation to Hanna Yurchenko), watches over her destroyed property, where other young volunteers pack their bags at the end of the day.

She was born in this house and lived there all her life. Cleaning it up was emotionally too difficult to do alone. She says this group of workers finished in a day what would have taken her months, even though their music isn’t for her.

“They’re young and they like music, so I don’t mind,” she says. “But honestly…I don’t have music in my soul right now.”

She stops, thinks, then continues, “You know what, though? Music is way better than bombs.”

As she speaks, a sunset fills the horizon – bright pink, orange, purple. It bounces off the gold-domed church next door and is reflected in the nearby stream.

A few volunteers interrupt their packing to take selfies, then continue to pile up the gear.

She thanks them. They wave and walk down the dirt road, the Bluetooth speaker continuing to blast. They turn a corner and the music fades. The village has become calm again.

Yourchenko walks up and stands in what was once his kitchen. Now, she says, she just needs help rebuilding herself.