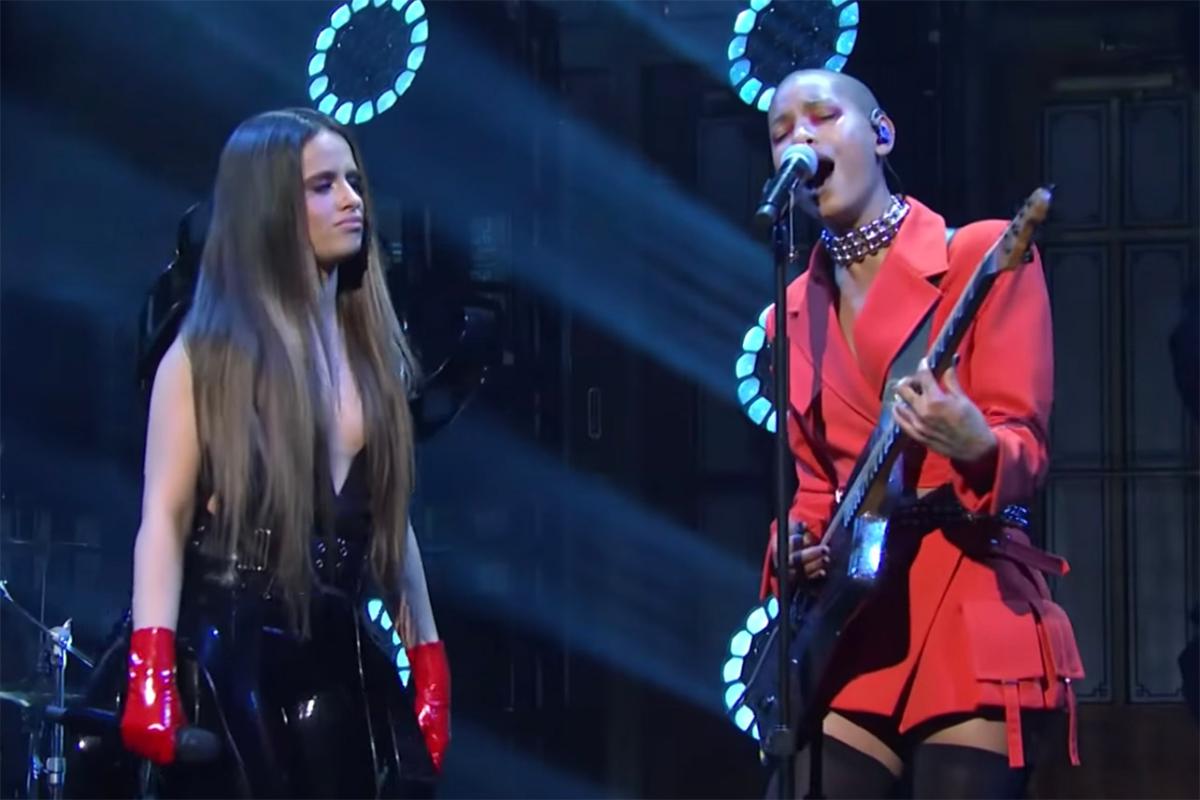 Last week’s episode of Saturday Night Live with Jerrod Carmichael featured one of the best monologues in a long, long time, and yet also a ton of head-scratching decisions about what sketches to air and how to play them before and after. There sure wouldn’t be any confusion as to how to handle Jake Gyllenhaal’s second SNL hosting this week, would there?

The show continues to try and throw a lot of characters into this season’s cold openings, even on a week like this, when they seemingly only have one current event at the heart of the premise: Ketanji. Brown Jackson winning confirmation from the US Senate to become the next justice of the Supreme Court of the United States.

James Austin Johnson gets a week off from playing Trump (which sounds weird even to type in 2022) to play President Joe Biden, congratulating Judge Jackson (Ego Nwodim) in the Oval Office of the White House. Chloe Fineman interrupts to urge the president on his next nomination, but not before her wish to talk about the past rubs off on the judge, who first conjures up the ghost of Justice Ruth Bader Ginsburg. Kate McKinnon has one more chance to throw RBG zingers, including jokes at Ted Cruz’s expense. Kenan Thompson introduces himself as the late Judge Thurgood Marshall, surprised at how not everything has changed; Punkie Johnson’s Harriet Tubman, meanwhile, is amazed at how much everything has changed; and Chris Redd’s Jackie Robinson warns racists will likely still throw batteries at him. Overall, it’s a nod to not only the nation’s progress in breaking down racial barriers, but also how far SNL has come since a 2013 cold open with Kerry Washington in the White House where SNL had to make fun of its lack of cast diversity. .

How the SNL Guest host Jake Gyllenhaal Do?

Jake Gyllenhaal stars in the new movie Ambulance, but he didn’t even mention it! Sorry, Michael Bay. No catches for you. Our man Jake is too busy reminiscing about how he first and last hosted SNL in 2007, when he dressed in drag for a dream girls little in this monologue, “and that was actually the least problematic thing in this episode.” Jake also calls his profession a “really stupid job”. It’s pretend and it’s fun and it should be filled with joy.

And the guy who played “Mr. Magic” in John Mulaney & The Sack Lunch Bunch would be upbeat and musical tonight, singing four different times in the episode, including this monologue too – as Chloe, Ego and Cecily Strong backed it up (wearing their pre-show backup dancer dresses) covering ” It’s All Coming Back” by Celine Dion Mine now.

For a guy who said in the monologue that he didn’t like going to Method, he wasn’t asked to portray real people we would recognize, with two exceptions. The first is this pre-recorded Property Brothers parody that finds Jake and Mikey Day as “Dream Home Cousins” looking to give just that to a couple played by JAJ and Heidi Gardner. Only stepmother Bea (Kate) has any other ideas, and the cousins ​​have completely redone their house to Bea’s specifications. Even importing Bea’s circa 1978 green electric stove and toaster into the kitchen. And take down all the windows in the bathroom so the “perverts and shooters” can’t see Mom Bea “dirtying her up.” Kate knows how to play cray cray old lady. But stay. Yeah.

Mikey also presents The Singers Four (Jake, Kate, Cecily, Bowen Yang) for their first major reunion concert in five years, so you’re expecting something special. And yet. They dedicate this song to people in the middle, neither winners nor losers, who may be bad at sex but at least you won’t be scared or angry? This sketch, on the other hand, wishes it could be in the middle.

The Midnight “Spring Flowers” ​​sketch, on the other hand, wouldn’t be a shrunken purple when it came to pulling its shot as a bit you’d remember. What is Bowen’s bee that hits the four flowers (Jake, Sarah Sherman, Cecily, Chris), a dog that pees on the flowers, Kyle Mooney as an unwanted weed (how much does he play in this meta commentary of her role on the show, I wonder especially after seeing her new short Cut For Time). And then there’s Chris’ flower, a late bloomer trying to make up for lost time. This skit certainly caused as many laughs as moans, but was it worth it?

This pre-recorded track, meanwhile, felt like a 10-to-1 idea that kind of progressed within the hour. It opens in a ladies’ room with co-workers chatting. SNL recently set up a similar sketch in the men’s room, but this time the plot twists once the ladies realize that Chucky (yes, the doll of the Child’s play movies) was in the stall listening to everything. Chucky (Sarah) starts stabbing the ladies (Chloe, Ego, Melissa Villasenor), like Chucky usually does. They are all called to HR, where Jake’s character calls them for intimidation and stabbing respectively. And also everyone hates Janet (Aidy Bryant), who takes notes and eats tuna.

The best showcases for just how awesome Jake can be came in the last half hour, though. Cecily Strong, playing an unnamed host of “Lights, Camera, Achoo!” features an excerpt from Jake’s version of Val Kilmer on Doc Holliday. Jake’s Doc Holliday, suffering from tuberculosis, coughs up blood and sneezes on bad guys Curly Bill and Johnny Ringo (Alex Moffat and Andrew Dismukes). And even though this sketch drops all sorts of modern references to Pedialyte, CVS, and Valtrex, Jake’s commitment to the character’s challenge makes this sketch stand out.

He followed that up with this track which had him read aloud the texts of “Couples Counselor” (Punkie) that his characters and Melissa go for their first therapy session, only to find themselves embroiled in the even higher conflict. of Punkie with her. girlfriend (Ego), who threatens to show up and kill her. Luckily, no one gets hurt in this skit, and after warning Jake not to do any vocals while reading “gurl”, all is well.

L’Oreal remembered to book its ad featuring Cabello as the company’s spokesperson during the show, so it’s more relevant. Although not as important, in terms of timing, as Cabello releasing his new album, Family, Friday. His album release party “broke” TikTok this week. His performances included two of the album’s new songs.

First came “Bam Bam,” which certainly sounded like a song featuring Ed Sheeran, even though Sheeran didn’t show up. Cabello and his dancers more than made up for it with their energy. Moreover, his second song was even more important.

It’s because Willow is on board for “Psychofreak,” which contains so many autobiographical allusions and meta-metaphors. Plus, it’s a banger that’s bound to be a smash hit.

Speaking of things on SNL that will touch millions of viewers, Kenan hosted a game show with contestants (Chloe, Chris, Jake) forced to admit why they really hit the “like” button twice on photos and specific Instagram accounts. Chris’ character keeps trying to “pass” his turn. Jake is under more pressure as his girlfriend (Ego) is in the audience, scolding him, because clearly they all liked the featured photos for one and only one reason. They hoped that someone would see their fellows and want to have sex with them. If anything, the sketch could have hit even harder with a solid escalation of the stakes. The closest they came was just a tease, ending with a potential third-round question: Why did you react to their Instagram Story when you’ve never met them? which, I’m sad to admit, made me re-evaluate the way I use Instagram. Which is a good thing!

Who stopped at the weekend update?

Just one visit to the Update Desk this week, and it’s the pair of trend forecasters (Aidy and Bowen) reminding us what’s IN and what’s OUT right now. But above all, they emphasize what we should no longer do. On the OUTS: Jogging with Kelly Clarkson (because she’s too busy with her talk show to motivate you); Wait outside the dressing room for your partner; and make a noise before sneezing that sounds like an orgasm.

Their catchphrase, “Go to bed, bitch!” Sounds a little ominous, as if to warn viewers of what’s to come?

What happened at 12:56 p.m. EST was a live skit that may or may not be sponsored by Love’s Travel Stops, and most definitely takes aim at the long-haul trucker lifestyle. Ego and Kyle play simple road-trippers who are bewildered by what they see for sale inside, but thank goodness Aidy is here to make the buzz with this 42-song CD collection, “Truck You, You Truckin’ Truck”, by Johnny Goblin (Jake). “Are all these songs about peeing?” Kyle asks. But wait, there’s more! Jake’s Johnny Goblin sings about putting his hand down his pants after eating Flamin’ Hot Cheetos. He sings with Cecily and Andrew about blowing that horn for the kids and accidentally picking up El Chapo (Melissa)? it looks like Clancy T. Bachleratt and Jackie Snad have found kindred spirits to keep rolling.

Who was the episode’s MVP?

Kate McKinnon played three great characters in the first half hour, but then had the rest of the evening. You knew Cecile Forte popped up whenever Jake sang. Ego Nwodim, however, carried the biggest load of the night, centering the open cold and then immediately backing up Jake in the monologue, providing balance to the game show sketch and the 10-on-1, and key to two other sketches. . His comedic fingerprints were all over the episode. Unless you want to stop for a moment longer to prop up Mr. Music himself, Jake Gyllenhaal. Which reminds me that the only way a guest host can do even more in one night is…

Next week, when Lizzo is both host AND musical guest!

Sean L. McCarthy Works Comedy Rhythm For His Own Digital Journal, The comic strip; before that, for the actual logs. Based in New York, but will travel anywhere for the scoop: ice cream or news. He also tweets @thecomicscomic and half-hour episode podcasts with comedians revealing origin stories: Comic Book Comic Presents Last Things First.