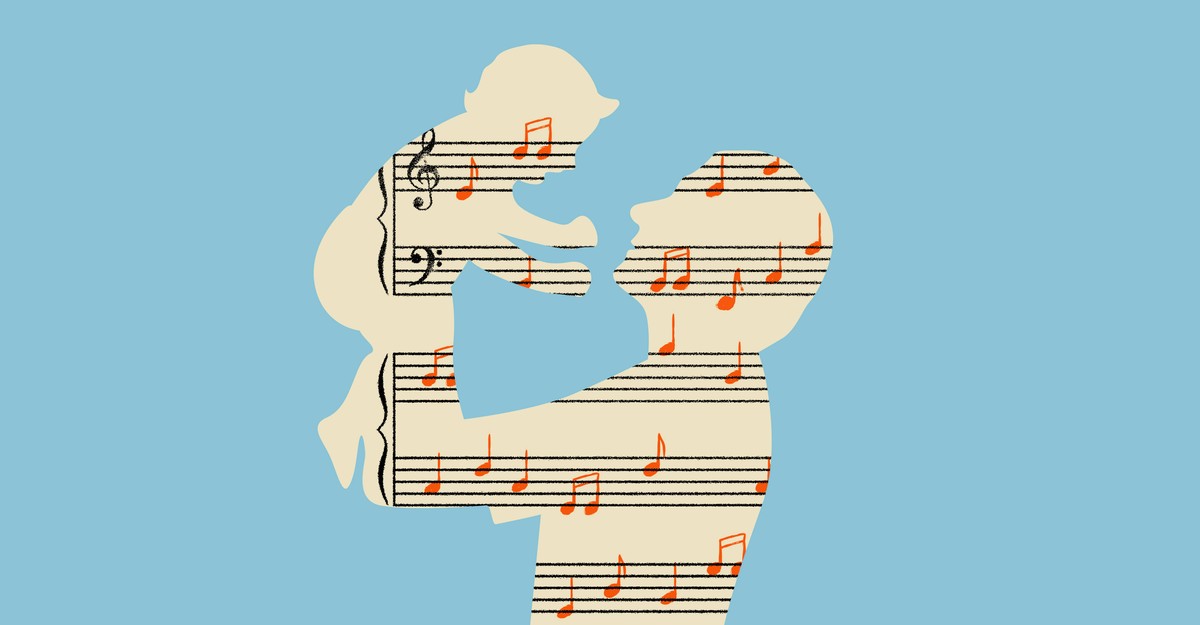 Randy Lubin remembers the exact moment his life became an improvised musical. The 35-year-old game designer from San Francisco has never sung, even in the shower or alone in the car. At his wife’s request, he performed kiddush, a Jewish prayer sung weekly on Shabbat, but that was it. “Singing wasn’t something I was looking for or particularly found great joy in,” Lubin told me.

Seeing his son Curio for the first time changed everything. “I just remember being overwhelmed with love for him and also feeling that he seemed so fragile,” Lubin said. It was in the newborn intensive care unit, while marveling at the baby’s tiny hands, that Lubin began singing, “Little fingers and little toes / Oh, Curio, we love you so .” These words – unrehearsed, sweet, heartfelt – became the beginning of a new dad’s musical awakening. Today, his original tracks provide a soundtrack to many aspects of domestic life: “Sleepy Boy” for nap time, “Get You Clean” for the dishes, and the ever-relevant “Mr. Poop Machine.

Singing made-up songs can be an active and rich part of home life, and a common starting point is the start of parenthood. But people don’t just serenade their babies; pets or even plants can also become unsuspecting audiences. On the surface, these songs are little more than nonsense – creative, creative melodies that fall from people as they interact with the little beings in their care. But they also offer caregivers and dependents a meaningful way to communicate when speech alone is limiting.

This musical connection begins with the way we talk to toddlers. Caregivers of all cultures often intuitively interact with young children using “parentais,” a style of speech that captures a baby’s attention with a higher pitch, more repetitions, longer sounds, and variations in tone. roller coaster intonation. It promotes language learning while inviting interaction between parent and child, even if the response is just baby babble. Many of these same qualities characterize the way we address our pets — think of the singsong way you might ask a dog if he’s a very nice, fluffy boy — which some researchers say stems from a similar caregiver instinct.

But singing to children or pets, instead of just talking, has distinct benefits. Studies show that infants prefer a mother’s song to speech, displaying greater alertness, happiness, or calmness depending on the type of song. Babies also find a father’s singing very engaging, especially if he uses a higher pitch. This power of song seems to be independent of language; babies will relax to a lullaby in any language, even if it’s not their first language. Although there is less data on how human singing affects animals, playing music for dogs, especially the laid-back beats of soft rock and reggae, has been shown to make them less anxious in dogs. kennels. (My partner tries to use this soothing power by serenading our cats as they cry out for their morning meal; we like to think they enjoy “Do you hear the kittens sing, sing the songs of the hungry cats” , inspired by a classic tune from Wretched.)

Read: Why people pretend to talk like their pets

Singing also helps parents feel competent and engaged in the daily work of raising children. A longitudinal study of a mother with a premature NICU baby, for example, found that singing daily to her son helped the mother bond with the baby, reducing her symptoms of postpartum depression and increasing her self-esteem. of herself as she adapted. to his parenting role. And these care songs, often performed with remarkable consistency in pitch, rhythm and tempo, can become reliable and validating scripts for parents to coax their little ones into different modes, such as sleep or playtime. “Babies are pattern finders,” says Elise Piazza, a professor at the University of Rochester who has studied early childhood communication through language and music. Piazza told me that singing creates a feedback loop, where a baby’s delight motivates parents to sing more and builds parent confidence. One can imagine that inventing their own songs to celebrate their particular child could further strengthen parents. It might help them understand a new person, a person who requires immense time and energy but cannot talk to them.

When parents sing, they create a shared context for their little listener and themselves. “Music is a form of joint attention,” Psyche Loui, a professor at Northeastern University who studies music cognition, told me. Some researchers believe that the song itself becomes a kind of meeting place, which helps the listener and the singer to synchronize not only emotionally but physiologically – their heart rates, for example, rise and fall together. Singing can also signal to both child and parent that the other is fully present. “It’s helpful for infants to feel comforted and secure,” Loui said.

For all that singing brings us, it has disappeared from many parts of American public life. These homemade hymns are usually kept deeply private, intended only for the child and caregiver. Chris Maury, director of engineering in Pittsburgh, Pennsylvania, told me that singing became a way to make a one-on-one connection with his daughter, Sydney. “When she was younger and couldn’t respond, it was more comfortable for me to sing to her than to talk to her,” Maury said. A lullaby he created turned into a special way to calm her down: “It was just for the two of us.”

To a foreigner, these songs may seem strange, silly or misinterpreted by tired people. None of this takes away from their effectiveness in forging social bonds. On the contrary, there is a magnificent power in creating personal, imperfect music to connect with the little creatures that depend on us.

In fact, given enough time and practice, these songs could become part of the family heirloom. The parents I spoke with for this story shared hopes of cherishing their songs in the future and envisioning using them one day to reconnect with the experience of raising a young child. Loui noted the power of music to evoke a particular time, place or, perhaps most importantly, a particular relationship.

It certainly works for me. A few years ago, a longtime family friend reminded me of a silly song my mom used to entertain me with on long car trips when I was a restless toddler. He assured me, with great pride, that he remembered all the words to “Be Especialee,” a melody in the style of a cheerleader chant that spelled out the letters of my old nickname. To prove it, he started singing out loud with all the pep and volume the number demands. After swallowing a twinge of embarrassment, I participated. It was ridiculous: two grown adults at a dinner table singing a baby song. But as we sang this beautiful nonsense, dreamed up by my mother decades ago, old feelings began to stir. By the time we finished the song, I knew I was deeply loved.