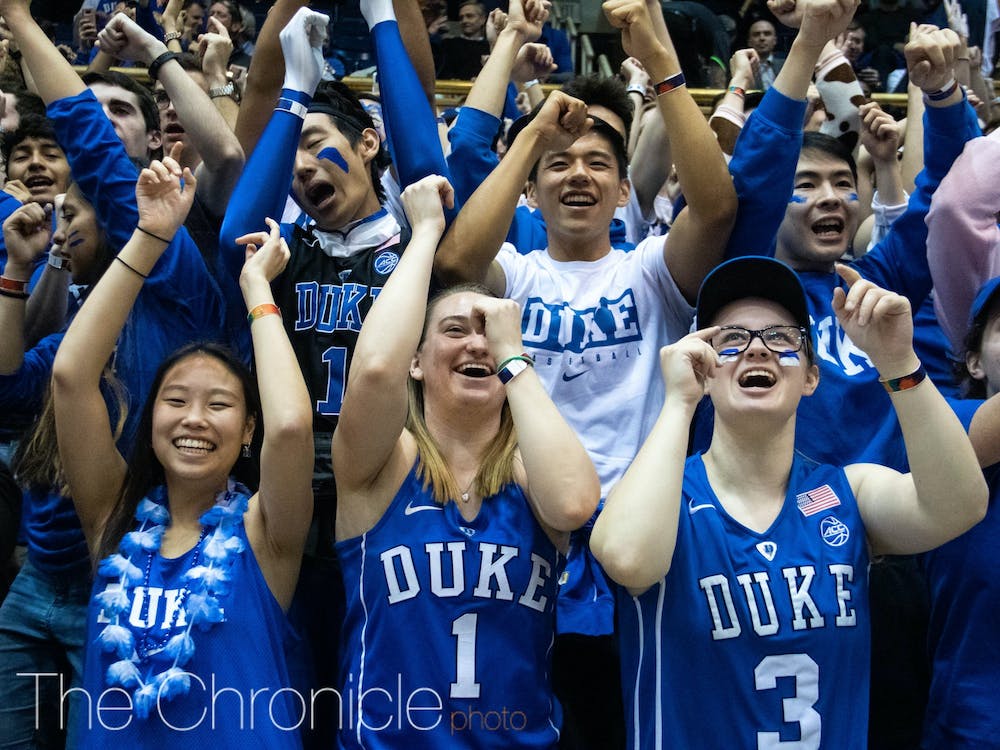 Cameron Crazies doesn’t begin to describe the madness and fervor with which Duke’s undergraduates lined up for tickets to Countdown to Crazy.

The stakes were high Sunday night, as this coming Friday marks the first time that Duke students, faculty and families will don their Duke gear to travel to Cameron Indoor Stadium for men’s basketball since March 2020. Cameron Crazies looks forward to the familiarity of the staple of events, such as the Bleu-Blanc scrum, field contests and captivating videos, as well as music, games and other festivities.

Not wanting to be without the comforts of their dorms, undergraduates arranged themselves around air mattresses, common room sofas, tennis court benches, and piles of blankets and pillows. As of 9:30 p.m. Sunday evening, students began to camp in Krzyzewskiville, despite the fact that ticket sales did not begin until 6:00 a.m. Monday morning.

The haze in the cold air couldn’t dampen the excitement in the air as the students were ecstatic with unfiltered glee at the thought of returning to Cameron. For many students, K-Ville represents their fondest memories of Duke; for others, it marks the start of their Duke experience.

â€œThis is what Duke is supposed to be,â€ said freshman Reima Bash. “This is how I know I belong here.”

After arriving at 11:30 p.m., believing they would be among the first students to arrive, a group of freshmen were shocked to discover the line was extending past the Wilson Center and already making a bend.

â€œIt’s completely crazy! I don’t understand how so many people are already here, â€said freshman Lauren Allen. â€œBut this is the Duke College experience that everyone is talking about. It will be a long night, but it will be a lot of fun.

The Cameron Crazy have found creative ways to occupy their time. Whether they were studying by the soft glow of sparse lampposts, playing football in the midst of a crowd of impatient students, telling complete strangers about their lives, or sleeping huddled under blankets drenched in mist, the community was growing. to build. The students were united in their universal goal of acquiring the coveted tickets.

Despite numerous reminders from line monitors about the punishment for cutting the line – immediate removal – many students still chose to â€œreserve seatsâ€ for their friends. The students hope that a better system will be in place for the remainder of the season.

â€œEveryone started lining up very early and there wasn’t much communication about it; it was all word of mouth. Everyone flocked to K-Ville with no organization or plan, â€said first year student Caroline Hancock. â€œThere was no responsibility for the people who cut the line. People who have been sitting here for hours have to queue, and that’s not fair.

The line monitors have done their best to keep students informed of the chances of receiving tickets, giving updates on or about hourly. They pointed out that no one was guaranteed a ticket; however, the students continued to hope for the best. Around midnight, line monitors scoured the rows of dedicated students to deliver bad news: the chances of receiving a ticket would be unlikely, and receiving a ticket in the students section would no longer be possible.

Many students expected to get enough tickets to invite their parents to join them at Countdown to Crazy with Parents’ Weekend October 15-17. Some have decided to leave their place in line, in favor of returning to the warmth of their bed. However, most decided to go ahead, hoping that the line monitor’s use of â€œunlikelyâ€ was hyperbolic.

Get overtime, all Duke athletics

Subscribe to our weekly newsletter organized by an editorial. Cancel anytime.

Sleep deprivation hit students hard at around 4:45 a.m., as students in various states of sleep, study, and worsening learned that the odds of receiving a ticket would be “”extremely unlikely. â€Morale took a hit and many students began to think about their decision to camp.â€œ Are the tickets really worth it? â€was the question on everyone’s mind.

Eyes drooped and shoulders slumped as the line monitors made their rounds again on the dewy lawn. This time, they announced that everyone should mentally prepare for the possibility of not receiving a ticket.

Sadly, many of the lunatics who camped long before dawn found themselves without tickets, and many of those lucky enough to receive tickets suffered a drop in their bank account. Fortunately, there will be plenty of other opportunities this season for the students to prove their dedication to the team, during the hours when the sun is shining.

The festivities will officially begin Friday at 4 p.m. in Krzyzewskiville, before Cameron’s doors open at 6 p.m.

However, judging by the events of Sunday night, the countdown to madness has already begun.