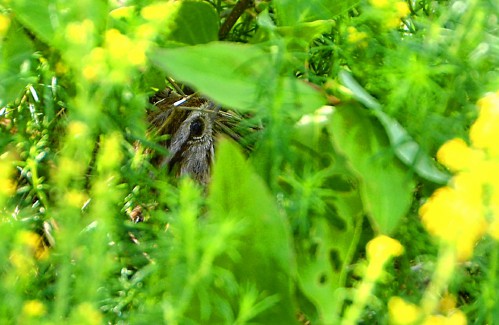 I had every intention of moving on to different taxa of flora and fauna in July, but a very close call with a bird’s nest brought me back to birds just a column later. As Michael Corleone said, “Just when I thought I was out, they brought me back inside.” And that particular quote is no coincidence because by the time you read this column, I will be in Sicily with my beautiful wife Susan.

It was the day before I left and I was working on a list of chores. Item #8 on this list simply read, “Tondez”. I had to bring the lawn down to a manageable level so it wouldn’t be too high by the time I returned. So, I hopped on the mower, pulled out of the garage, and started getting things done. The recent lack of rain made this quite easy as the grass hadn’t grown too long since the last time I fought it, but there was still plenty to do.

Long experience has taught me that it’s a good idea to go slow and keep your eyes peeled while working on this particular chore. A modern riding mower is an extremely deadly machine for any small animals that might be in the grass in front of you. But it’s equally important to keep your head on a swivel and constantly scan the grass to either side. On more than one occasion I have seen a vole panic and run towards the mower rather than away from it. So caution is the name of the game.

While out there on the mower I managed to avoid three Meadow Voles and a rather large American Toad. I also narrowly avoided a patch of virgin pink flowers, which is good because I want them to live long enough to go seed and replant. When I was done with the yard immediately surrounding the house, I turned my attention to the “field” to the west. It is a large area that I mow in patches so that there is always an abundance of flowers for bees and butterflies. While I was there I checked the condition of one of the nesting boxes in the open grass. I tapped the box several times, but no one came out. When I opened the box, however, I was given the evil eye by the visibly disturbed female bluebird inside. So I closed the box and went on my way.

Finally, I entered an area of ​​the yard that I call the “long boat”. It is a long, elliptical “ring” of daylilies, asters, goldenrods and other unmowed flowering plants, with a short central zone. It gives me lots of close-up opportunities that photographers need and it’s the exact same area where I found a wonderful garden spider a few years ago. When I started mowing the central part of this landscape feature, I noticed that the plants were encroaching on the center. So I thought about knocking down the inside edges a bit, but a movement caught my eye.

It was clearly a bird, but exactly what kind of bird was unclear. Far more important, however, was the exact spot where this bird first appeared. It was directly in front of the mower and it was perfectly aligned with the left front wheel. I carefully veered to the right, killed the blades, and rolled slowly to where the bird had been. It took me a while, but all of a sudden I saw a nest. A closer look showed a nest with four beautiful eggs inside.

It was the nest of a Song Sparrow (Melospiza melodia) and it was the first I have found in many years. About two feet off the ground in a small shrub that might have been three feet tall, the nest was surrounded by tall green grass and was virtually invisible to anyone who didn’t know it was there. I decided to leave the area as soon as possible and resolved to return a few hours later. I wanted a photo for this story, but was extremely careful not to endanger the sparrow, or its nest, in any way.

When I returned about three hours later, I approached from the south and noticed an agitated man nearby. I continued my approach and then saw the female’s face through a gap in the vegetation. I took a photo that perfectly depicts how well hidden she was, but another step towards her and she flew out of the nest and looked hurt. Not falling for that old trick, I moved closer to the nest and when I lifted some overhanging leaves with my left, I exposed the nest for a quick burst of photos. I backed up as fast as I could and I doubt I was there more than 60 seconds, but I got the hits I was looking for.

The beautiful nest, made of loose grass, had a perfectly circular cup-shaped interior and the four eggs, pale blue covered in faded brown spots, couldn’t have been more perfect. The baby sparrows that hatch from these eggs may still be in their nest when I return from Sicily, but it all depends on how old the nest is. I might find pink chicks and I might find nothing, but no matter what, I’ll be glad to know that the birds were allowed to live their lives and just missed a horrible fate. It pays to keep a watchful eye, even when doing something as mundane as mowing the lawn.

Bill Danielson has been a professional wildlife writer and photographer for 25 years. He has worked for the National Park Service, US Forest Service, Nature Conservancy and Massachusetts State Parks and currently teaches high school biology and physics. For more information, visit its website at www. Speakingofnature.com or visit Speaking of Nature on Facebook.