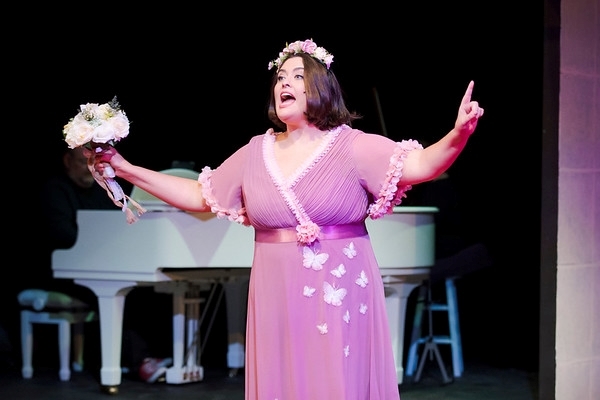 “I love you, you’re perfect, now change” is a lighthearted musical with only four characters. But the Hillbarn Theater version, through May 8, actually has nine stars.

Along with the quartet of fine-voiced actors, this production of Joe DiPietro’s melodious 1996 musical also features two excellent musicians – Jon Mattei playing a spectacular white grand piano at center stage and Paula Filseth on the fiddle – an industrious costumer in Ashley Garlick and an itinerant behind – stage dressers Alex Rosenberg and Chloé Levadoux.

For this show, the dressers definitely deserve the spotlight because each of the four performers only has a few seconds to perform about thirty costume changes.

Director Erica Abrahamson pushes the whole thing forward at a rapid pace, with blackouts between scenes lasting only a few seconds. It helps that the set remains fairly consistent, with large squares of white “tile” as backdrops and only a few sets moved by a hard-working two-person stage crew.

For such lighthearted entertainment, it’s surprising that “I Love You” is the second-longest-running off-Broadway musical ever, opening August 1, 1996 and closing 5,003 performances later on July 27, 2008.

The show is a series of vignettes mostly tied together by the themes of relationships and love. In between is a pleasant mix of typical human activities ranging from dating, romance, and marriage to lovers, in-laws, children, and divorce.

Actors Hayley Lovegren, Jack O’Reilly, Keith Pinto, and Samantha Rose Cardenas are up to the task, and most of the scenes are fun, if quickly forgettable, but a few stand out:

“Cantata for a First Date” and “Not Tonight, I’m Busy, Busy, Busy” is a fun riff about meeting for a first date, then realizing that first dates are awkward, so move on. directly to a second, third, fourth, then have sex – or not;

Lovegren stands out in the second act number, “Always a Bridesmaid”;

Pinto hilariously sings “The Baby Song,” which is basically a 6-month-old’s complete vocabulary; and

Lovegren and Pinto sing beautiful a capella harmony in the sentimental skit titled “I Can Live With That.”

None of these songs are likely to stay stuck in the collective head of audiences, but Hillbarn has crafted a solid two-hour production that makes for a satisfying theatrical evening.