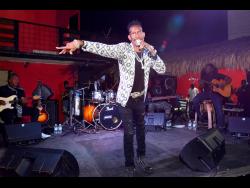 There’s an unspoken protocol to congregate on stage whenever Tanya Stephens steps out, and it was no different when she headlined the second staging of the “Acoustic Live” series of Bamboo Splash Lawn in St Andrew last Thursday.

Decked out in her signature ensemble of black, a touch of denim, aviator sunglasses and boots, the singer had a nearly 90-minute “therapy” session about love, lust and heartbreak, with tongue-in-cheek anecdotes and interludes that provoked the male ego (classic Tanya), and became as random as discussions of unshaven armpit hair.

Heights soared, choirs sang and phones broke as Stephens performed classics like Yuh Nuh Ready Fi Dis Yet and Manage the tripbefore moaning and moaning his way into Boom Wuk. which drew a “pull up” from MC Marko. Although the 49-year-old said she was too old for a second take, the encore provided the setting for thought-provoking entertainer conversations about, well, “ding dongs.” Stephens has made it clear that she’s an equal-opportunity kind of girl and doesn’t discriminate against little sissies in any way, positing that mental stimulation is where it’s at.

The St Mary’s star has progressed beyond the sex rides of a relationship with chronicles of “matey” and his wife’s woes. Customers pointed fingers while singing the lyrics to What’s your story? and vocally savored the reduced quality of life of the insignificant man in I can not breathe. A passionate patron was totally in favor of taking him to tire-blowing heights, and Stephens paused to declare that people shouldn’t be swayed into doing anything illegal because of his lyrical plotlines. His statement was backed up by the band playing After youand, soon enough, the audience was more interested in the teased song and decided to start singing along without it.

Somewhere between the interludes about society’s patriarchal house arrest and the effects of toxic co-parenting, also came sidebars about superficial beauty and her infamous wigs. By this time, Stephens was admittedly hoarse, but the raspy texture added a new dimension to songs like Tek him back. Audience favorites like I lied, What a day, These streets and That’s a shame permeated the room, and it culminated with fan requests, with One more shot to lose noticeably taking the cake.

Given the disrupted live events scene due to the pandemic, it was just the therapy Stephens needed.

“It was very therapeutic,” she said The Sunday Gleaner. “People did well, mi nah lie. A really great audience, a great venue, a great event. I really hope it will grow more and more.

“She is the lead therapist for a group of therapists who help me and other survivors of sexual violence start our healing process. Well, I’ve already started mine, but other people are in the group and we’re doing virtual sessions and everyone is welcome. Men are also welcome, as she understands that the experience is not limited to us…. So if anyone needs this service, it is free, email endtrauma@gmail.com.

A night of storytellers

Stephens wasn’t the only storyteller that night. Veteran deejay Professor Nuts was also selected and captivated the contestants with brilliant narration injected with comedy and acting bursts.

In what felt like a live masterclass of toasting on the B-side of a 45 in the dancehall, Nuts tweaked several songs on the To respond pace, a seemingly good move to let patrons appreciate the genius of its catalog, such as the calamity of falling in love with Big John’s wife and the benefits of choosing “Tan So Back” over violence. Between the tales of Cassanova and the subjects of oral sex, the Bus Inna Di Deejay even found himself laughing at his own material with the audience, which intensified during his spirited performance of Be careful. The crowd applauded him for his entertaining set, but wouldn’t let him leave the stage without playing his bad boy jimmy hit.

Nuts said it was one of the few local performances he had done since the pandemic.

“We’re all human beings and if you know how to regulate your performance so the crowd will accept you, they’ll always be into you because you’re not throwing yourself at them, you’re bringing them to you,” Nuts said. The Sunday Gleaner. “I appreciate how they appreciate me tonight and I love it. It’s just different here, and the environment, wow, everyone just holding these tiles and staple them and having fun.

Boss Michelle Morgan said: ‘I enjoyed the evening. I went out for Tanya as I always wanted to see her in concert, and Professor Nuts was a plus. I’m 47 and I’ve been singing and listening to both all this time.

“It was a very good performance from all of them. I enjoyed it.”

The evening also saw performances from the I Lite Band and DJ Banka on both.