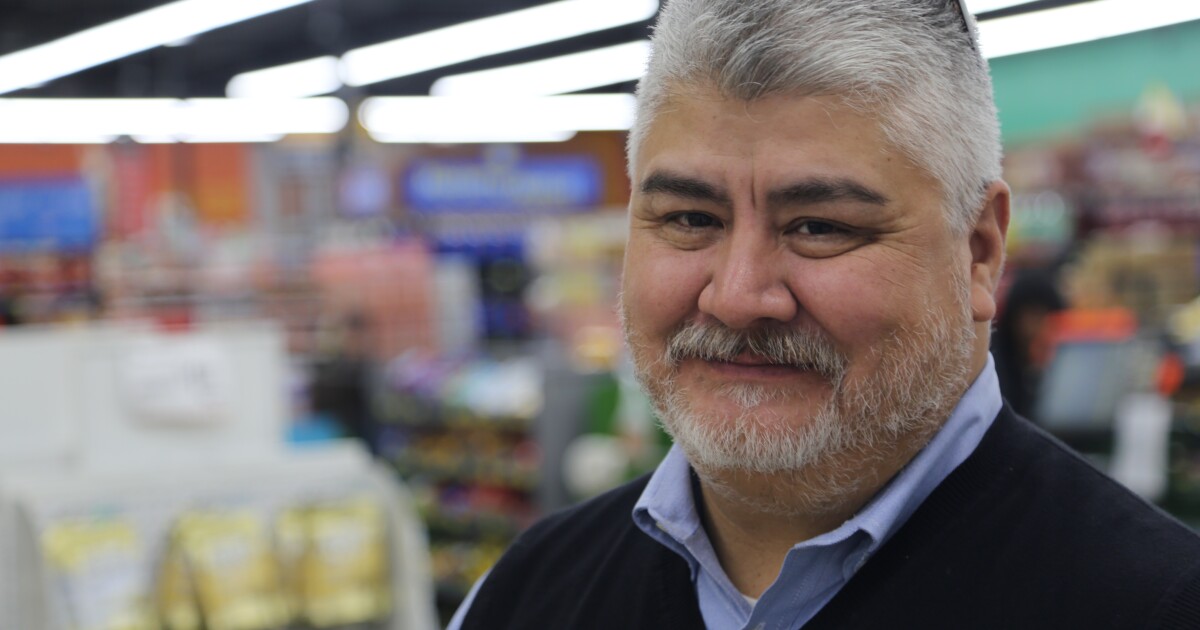 MILWAUKEE – In Milwaukee, there is a neighborhood with barely any houses. Very few people live there. But the sense of community is as strong as any cul-de-sac.

This neighborhood is called South 27th Street and is part of historic Highway 41.

So how can a commercial district, on a busy road, be considered a neighborhood? Because a neighborhood can also be where you work. After all, a neighborhood is what you make of it and the relationships you build with the people nearby.

“Every color. Every creed. Every religion. Every person you can think of is in this neighborhood,” said Roberto Montemayor, the owner of the Monterrey Market on South 27th Street.

In this edition of the My Block series, I met Roberto Montemayor and explored South 27th Street, also known as Historic Highway 41. I wanted to learn more about the neighborhood through his eyes and experiences. Where we went and who we talked to was up to him. There was no script to follow. Welcome to South 27th Street.

Historic Highway 41 stretches from Michigan’s Upper Peninsula to Miami, Florida. It was built in 1926. Highway 41 was the main route for drivers to travel between Chicago and Milwaukee until the construction of I-94 in the mid-1960s.

The part of this long road that we examine for this story is between Oklahoma and College Avenue in Milwaukee. It is known as the South 27th Street Business Improvement District.

The neighborhood stretches from Oklahoma Avenue in the north and heads south to West College Avenue. That’s about four thousand mainly commercial businesses.

Roberto Montemayor, also known as Don Roberto, is the owner of the Monterrey Market on South 27th Street. It also has another location on South 13 Street. It’s a family run grocery store that has all types of food and produce, but also has tons of produce for the Latino population that lives in the area.

“You have the option of walking into a grocery store and you’ll have these spices that you can buy. The tomatillos. You can buy the cilantro (and) the avocados. All that fun stuff, but, you know you can come here too and if you’re going to have a party, you’re also going to have a piñata,” he said.

Roberto considers it equally important to offer a variety of foods for all populations, but also to cater to Latin American demographics. They make their own homemade tortillas and also have a mini taquría inside.

As Roberto walks the aisles of his grocery store, he talks to many people he sees – in Spanish and English.

His grocery store is a gathering place. It is one of the most popular businesses on the street because it is also one of the largest. This is where people come to get ingredients for family dinners. It is the cornerstone of family traditions.

“You have to have this meal with mom, dad and the kids together,” Roberto said.

Once we crossed the aisles, Roberto led us through the parking lot to his neighbor.

Physiotherapy Milwaukee is directly across from the Monterrey Market parking lot. Dr. Sylvestra Ramirez owns the business and has opened three branches since 2013. She was not in the office when we visited. However, his employee Ruby, who knows Roberto well, was there.

“At my first grocery store, Ruby was actually one of our first cashiers,” Roberto said.

Ruby works at the reception. She enjoys working at Physical Therapy Milwaukee. She feels there is a strong sense of community between all the companies. They know each other. They help each other. South 27th Street is no different from any residential neighborhood. Everyone is close to each other. Additionally, just as neighborhoods have community organizations, many businesses here are also part of the same communal group.

“Just the fact that a lot of the businesses that are here are either family owned or have been around for so many years that people know the area very well,” Ruby said.

Beyond the physical services they provide, she is happy to be part of a bilingual company that can help people who sometimes cannot receive the care they need due to language barriers.

“There are a lot of things that sometimes patients don’t understand, and having someone who speaks your own language and is able to explain things to you is always a plus,” she said.

South 27th Street is located on the south side of Milwaukee and has a large Latin American population, which makes these services so important. It’s a similar philosophy to the Monterrey market. While both businesses can be visited by anyone, the focus is on the Latin American population. In fact, physiotherapy has made a point of opening sites in Spanish-speaking areas.

“(Dr. Sylvestra Ramirez) wanted to be in a place where it’s accessible to all patients. We’ve just opened a second location in South Cesar Chavez now,” Ruby said.

After our tour of the Milwaukee physical therapy office, we hopped in Roberto’s car and drove a mile down historic Highway 41 to the business of his friend, Bigg Putts.

Bigg Putts is a miniature golf course and arcade. On the front of the building is a joke and nod to Sir Mix-A-Lot’s song “Baby Got Back”. It reads “I love Bigg Putts and I can’t lie”.

Big Putts has been around since 2004 and is owned by brothers Jeff and John Majdoch. He also experimented with offering laser tag and go-karts. These brothers are also the owners of the State Fairgrounds Halloween store. It’s the giant Jack-o-lantern you can see from the highway.

Jeff said his favorite part of the neighborhood is its diversity.

“People of all colors, all races, all religions and everyone gets along. It’s kind of the best of all worlds right in the middle of Milwaukee,” he said. declared.

Although Jeff doesn’t live in Milwaukee, he said South 27th Street was the best street in Milwaukee. He knows his neighbors like Roberto and he has tons of loyal customers who are part of the Big Putts family.

“Having worked all over the city, this is the neighborhood I call home.”

Big Putts didn’t just make a random decision with his mini-golf course. They went with a “wheel theme”. They have tons of vintage car parts and street signs that pay homage to historic Highway 41. They also have skateboards and ramps that are a nod to “The Turf” skatepark that used to be near.

“We kind of connect everything – 27th Street and the Southside – to our funny little world here.”

After a few holes of mini-golf and a few arcade games, it was time to head back to the Monterrey market to wrap up the South 27th Street tour.

All My Block stories end the same way. We return to where we started and I give the tour guide the final word on the series. In this case, it was Roberto.

Prior to that, you can become part of the My Block series by contacting James Groh at james.groh@tmj4.com or calling/texting him at (414) 254-8145. You can submit your neighborhood, yourself or a neighbor for a feature.

“Is there anything else you would like to say about your neighborhood? I asked.

“I think what really created this neighborhood, this community, was the fact that we finally all came together in some way,” Roberto said.

Report a typo or error // Submit a news tip