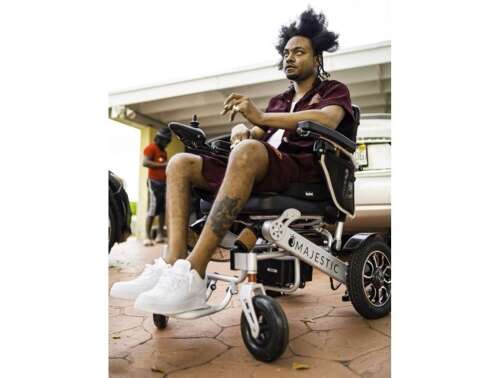 RYGIN King said he put maximum effort into his debut album Therapy, which was released on September 9 by his Rygin Trap Records.

The 16-song set, which includes the popular title track as well as Circumstances, the craziest life and Brokenhears the deejay relate life experiences.

“A lot of work has been put into this album. Just by listening to it, all the songs are really connected to many circumstances like mine and other people in similar circumstances and situations in the same way”, Rygin King said Wednesday in an interview with the Jamaica Observer.

Therapy, which has songs produced by Hemton Music, Sky Bad Productions and Caution Beats, debuted at number 11 on this week’s Billboard Reggae Albums chart. It sold 750 equivalent album units in the United States, according to Luminate.

In 2020, Rygin King (real name Matthew Smith) was injured following a shooting at a funeral in Westmoreland that left him paralyzed. His girlfriend, Sashalee Blackwood, was killed in the incident.

“The message I want people to take away from listening to this album is that God is the Christ. No matter how hard and difficult it seems, God is working on it for us. It’s the drive and the energy that I use to do what I do to make that happen. Un him a leader,” he said.

St James-born Rygin King is a former Magnum Kings and Queens of Dancehall talent competition entrant. In 2018, he scored a hit with Tuffone of the most popular songs of that year.

His subsequent successes include 3ZN, Circumstances and Things will change.