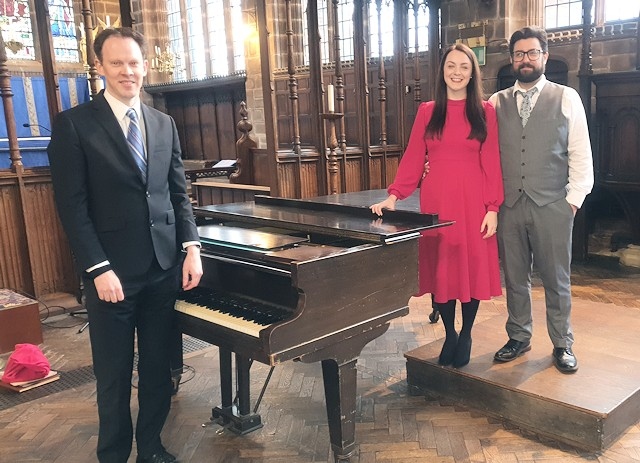 Heather Buckmaster graduated from the Royal Birmingham Conservatory with First Class Honors and completed her Masters in Music Therapy at the Guildhall School of Music and Drama.

Heather has performed many operatic roles and appeared as a soloist in major choral works.

Joseph Buckmaster was born in Chester and became a chorister and lay clerk at Chester Cathedral, where he and Heather married last May. After studying at the RNCM and the Royal Academy of Music in London, he is currently a freelancer and member of the choir of the Royal Opera House and the English National Opera.

They were expertly backed by Tim Kennedy on the piano. A Cambridge music graduate, he is now based in Manchester as an accompanying pianist, professional singer, vocal coach and organist. He is a staff tutor at the RNCM.

Brindisi (Drinking Song) from Verdi’s La Traviata was a grand curtain raiser creating an operatic gala atmosphere. Then come individual arias, Joseph with E lucevan le stelle (And the stars shone) from Tosca by Puccini, and Heather Je Veux Vivre (I want to live) from Roméo et Juliette by Gounod. All beautifully sung with lots of character.

Similalry, Heather de Poulenc’s Engagement for Laughs cycle, was a sophisticated and seductive ensemble of French chanson sung with controlled sensitivity and passion.

Of course, with such talented soprano and tenor soloists, the highlight had to be the closing scene from Act 1 of Puccini’s La Bohème, complete with off-stage top Cs. The tumultuous applause demanded an encore and The Song That Goes Like It – from Spamalot provided that, where they showed even wider musical theater skills.

This talented pair of rising stars made a huge impact.

Toad Lane’s award-winning concerts take place every Wednesday at 12.30pm at St Mary in the Baum, Toad Lane, Rochdale, OL16 1DZ. The entry fee is £6. No refreshments available at this time, but the venue is Covid-19 compliant. Contact 01706 648872 for more information.

To see the program for February and March 2022, click here.