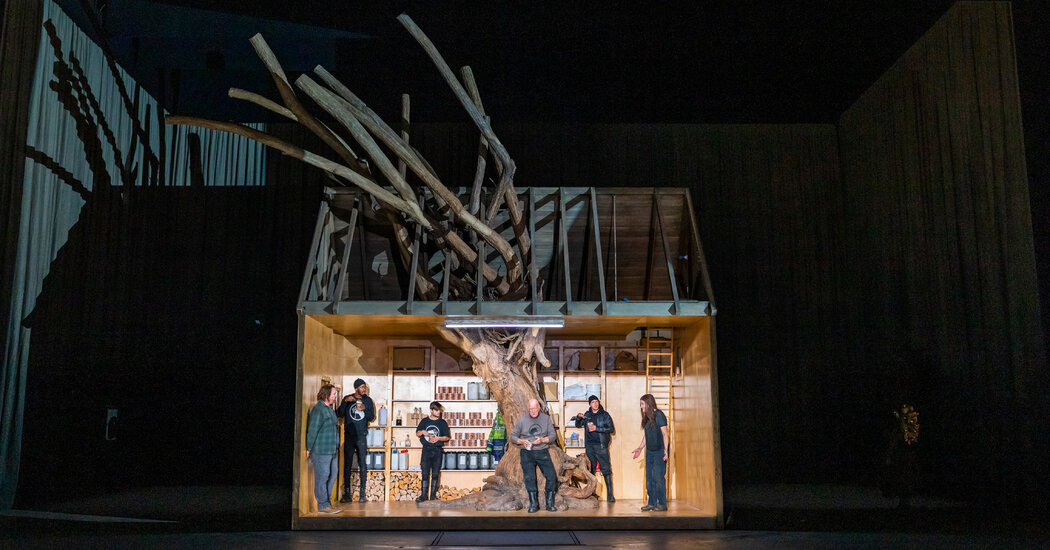 LONDON – It’s never a good idea for a critic to make predictions, but I’ll risk one: when the Metropolitan Opera’s next staging of Wagner’s epic ‘Der Ring des Nibelungen’ arrives at New York in a few years, there won’t be all the stories on the set.

The last time the Met unveiled a “Ring” 11 years ago there was hardly any story about anything. corn the setting: Twenty-four massive rocking boards designed by director Robert Lepage. Splashed with projections, these plates were shaped in the various places of the sprawling cycle of four operas, from the heavens to the depths. And â€œthe machineâ€, as it was called, never ceased to be talked about, with its 45 tons, its technological sophistication, its phenomenal expenses, its squeaks and its dysfunctions.

It worked, the Met insisted, more than it did. But whether they work or not, the machine has always been the center of attention – not the music, characters or intellectual themes of Wagner’s deeply human and politically charged magnum opus.

Richard Jones’ new production – whose first installment, “Die WalkÃ¼re” premiered on Friday by the English National Opera at the London Coliseum – could not be more different. (â€œDas Rheingoldâ€, â€œSiegfriedâ€ and â€œGÃ¶tterdÃ¤mmerungâ€ are expected to be deployed here over the next few years before anything arrives in New York from 2025.)

Simple, direct, clear and sinister, Jones’s â€œRingâ€ has so far presented uncluttered sets, even non-existent at the end: the final act of his â€œWalkÃ¼reâ€ takes place on a bare stage, sprinkled with black snow and ringed with plain dark curtains. The machine is no more.

In this austere environment, designed by longtime Jones collaborator Stewart Laing, the interactions of the opera’s emotionally hurt and invariably disappointed characters are darker than ever. Amid the austerity, the secret love of Siegmund and Sieglinde in the first act offers them less ecstasy than barely momentary relief. In the third act, without Lepage’s boards noisily shaping a snow-capped mountain around BrÃ¼nnhilde and Wotan, the audience is not distracted by the broken relationship of this father and his daughter.

The decor is contemporary – but vaguely, stylized, almost abstract. In the opening act, the hut that Sieglinde lives in is an isolated hut of eerie novelty, as if a band of survivors had recently built a refuge. (It might not be far: her husband Hunding’s gang all have the same obscure militia-style symbol printed on their shirts.) At the start of the second act, Wotan, dressed in a bright red ski jacket , stay at a lodge; BrÃ¼nnhilde wears sneakers, a loose t-shirt and shorts, with her name printed on the sides.

But although soprano Rachel Nicholls, who plays the role, said in a recent interview that Jones’ vision of BrÃ¼nnhilde, the heroine of the cycle, is loosely based on Greta Thunberg, it seems more of a reference to the young claim of Thunberg than his environmental activism. This is a “Ring” of ongoing events, but not (at least not yet) explicitly. Wotan and his furious wife, Fricka, chic in white, are identifiable bourgeois here, but there is no strong social or political message at the origin of the conflicts in opera.

Like many recent productions of The Ring, the overall modern gloss of it is littered with traditional touches, and little here really violates the libretto. A tree grows in the center of the hut in Act I, just as Wagner wrote, its branches tearing through the roof and a mighty sword sunk into its trunk. The Valkyries have horses – shivering actors draped in cloth with animal heads – and spears. At the end, BrÃ¼nnhilde, who wears a breastplate on her T-shirt, is surrounded by a ring of blazing fire. (Well, more on that later.)

And the production, although spartan, does not skimp on theatrical flair, as when the Valkyries, charged with transporting slain warriors to Valhalla, tie ropes to the bodies of the men, which then float in solemn sluggishness. Without a stage performance, the small events – like Hunding’s hut slowly moving backstage – are almost thrilling.

Jones also elicits tiny but revealing moments from his performers. Climbing on all fours on a daybed, the eloquent and lyrical bass guitar Matthew Rose translates in an instant the essential childishness of Wotan, the king of the gods. And when Fricka reaches out a few inches, trying to take her unresponsive hand, it’s a miniature portrait of a broken marriage. Siegmund lifts Sieglinde’s sleeping body and walks with her so that her toes drag across the floor, a strangely poignant interweaving of love and death.

It’s quite more detailed, touching, thought-provoking and satisfying than the production Met it will replace. And revealingly, Jones’ unique use of projections is more haunting than anything Lepage has come up with: the infamous Alberich, who forged the almighty title ring, appears, grinning with capped teeth. or, like Wotan’s waking nightmare.

The applause at the end for Jones – barely euphoric cheers, but not a boo to hear – must have been gratifying for a director whose history with the “Ring” is troubled. After an aborted cycle at the Scottish Opera, started at the end of the 1980s, he made a new effort at the Royal Opera in London a few years later, in the spirit of the influential Brechtian and absurd “Ring” that Ruth Berghaus put in. scene in Frankfurt in the mid -80s.

Jones’ “Ring” was a notorious fiasco, with the whistles – brought on by Rhenish girls in big costumes, Fricka driving what looked like a black cab, Beckettian giants, childish designs and tribal masks – making headlines. local newspapers. It was enough, in his story, to scare Jones out of the opera a little. (During his hiatus, among other projects, he directed the musical “Titanic,” which overcame a series of early technical issues to become a Broadway hit.)

But he has since returned to opera houses for good with productions including a melancholy and dreamlike “HÃ¤nsel und Gretel” which has been a frequent presence during the holidays at the Met since arriving there in 2007. A surreal image. of this production returns in Jones’ “WalkÃ¼re”. Â»: The fish and the trees in costumes ofÂ« HÃ¤nsel Â»are now shadow figures on the margins of the set, with human bodies and oversized bird heads.

The English National Opera – which performs, as usual, in English translation – has assembled an excellent British cast committed to Jones’ vision. Nicholls’ voice isn’t huge, but it’s penetrating and sweet, and she is convincingly a smart, courageous yet stubborn teenager. Tenor Nicky Spence is a tough, lame Siegmund; Emma Bell’s strong but gentle soprano, full in all its range, vibrates with emotion like Sieglinde; bass Brindley Sherratt is a brooding and bruised Hunding.

Suffering from a cold, Susan Bickley played Fricka while mezzo-soprano Claire Barnett-Jones – one of the Valkyries – sang it, with articulate power, from the side of the stage. Martyn Brabbins, the musical director of the company, conducted a lethargic first act which then improved in responsiveness, never feeling really urgent. (At the Met, Yannick NÃ©zet-SÃ©guin will lead a different ensemble of singers.)

Everything does not work in the setting in scene: when the action is thus exposed, any misstep is amplified. Siegmund and Sieglinde end the first act in circles, which sounded silly. And while BrÃ¼nnhilde and especially Wotan’s agonizing calm in their long final scene works in theory, Rose and Jones don’t quite sell her endless impassiveness, and the tension sometimes slips.

But all in all, it will be a tonic for the Met and its audiences, conditioned by the Lepage era – and Otto Schenk’s monumental 19th century-style staging that preceded it – to think the “Ring Can not be donned without extravagance and impossible expense. Jones offers to reconnect with the intimate drama at the heart of the magical fire.

Oh, but about those flames. Even with such a seemingly simple production, it just wouldn’t be a “Ring” without technical complications. Days before Friday’s premiere, the local government vetoed the crucial fire and climate effect to keep the century-old Colosseum safe. So BrÃ¼nnhilde, wrapped in Wotan’s jacket, was lifted up to the flies – and hung there while the scene remained cold and bare.

Yes, Jones’ “Ring”, just like his predecessor Lepage – whose rainbow bridge stalled on the opening night of “Das Rheingold” – officially started with a headache. Maybe the Met should start working on these fire code approvals now.

Until December 10 at the Coliseum in London; eno.org.