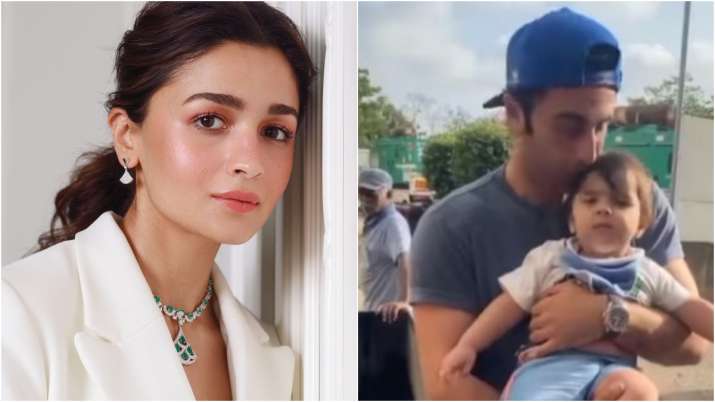 Alia Bhatt and Ranbir Kapoor got married on April 14. Since then, the couple have been busy with work and trying to find the perfect balance between work and personal life. Ranbir recently attended Karan Johar’s birthday party in Mumbai with his mother Neetu Kapoor, but Alia missed it. However, Ranbir made sure to make the most of the evening with his industry colleagues present.

Meanwhile, Alia posted a video of Ranbir holding a baby in her arms and playing with it. The reels video shows Ranbir having fun with the baby and Alia was impressed with the way he handled the toddler while enjoying the moments with the little one. The song Kesariya, from the Brahmastra couple’s upcoming film, plays in the background of the video. Alia posted this video to her Instagram Story and wrote, “Okay. This video is full of vibes.”

Alia and Ranbir moved into the Vastu building after getting married in a low-key ceremony.

Meanwhile, SS Rajamouli, the director of RRR, has released a video preview of the highly anticipated Brahmastra film’s first song, Kumkumala. “Here is #Brahmastra song #Kumkumala promo: part one. Nice to present in Telugu. See you in cinemas on September 9th,” Rajamouli wrote while sharing the preview of the upcoming melodious song. Rajamouli introduces the film to the Telugu audience. In the new clip, there are never-before-seen previews of the film featuring the lead pair of Ranbir and Alia.

The song, composed by Pritam and sung by Sid Sriram, captures everyone’s attention. The lyrics written by Chandrabose are impressive. Brahmastra is one of the most anticipated Bollywood movies in recent memory. The socio-fantasy film is directed by Ayan Mukerji. The multilingual action film will be released worldwide on September 9, 2022 and will also star Tollywood actor Nagarjuna alongside Amitabh Bachchan and Mouni Roy.