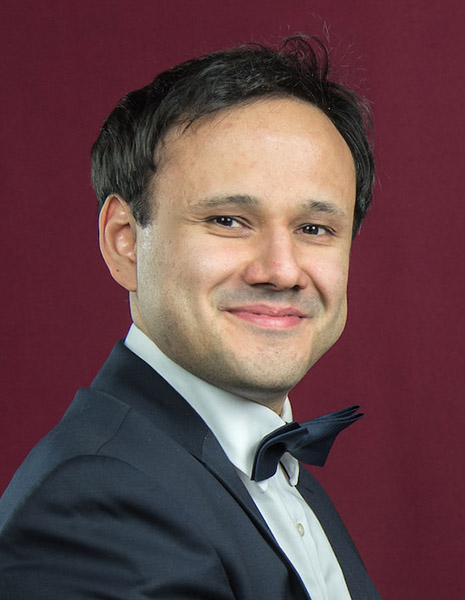 Stepping in with barely a week’s notice as backup pianist at the Frederick Collection concert last Sunday, Gusev didn’t have time to rehearse with the collection’s Chopin-era Erard 1840. After having played the Erard 1893 for its 1st of Mayst appearance on the show, he and the Fredericks felt he should play the piano he knew. Gusev had first offered to choose between a Chopin program or a Beethoven-Schumann program for May Dayst; but since Thomas Pandolfi was to play a similar Chopin program on May 22n/aGusev played the Beethoven-Schumann on May 1st. Extreme weather fluctuations in late April threatened the tuning stability of Beethoven and Schumann-era wood-frame pianos in the Frederick Collection; the metal-framed Erard of 1893 would hold up better. So Gusev showed his May Dayst audience how Beethoven and Schumann might have sounded to an 1890s Parisian audience – far from the first example of period cross-references for these concerts.

May 22n/a The Chopin program was Gusev’s third appearance in the Historic Piano Concertos since his debut in the October 2021 series, playing all Rachmaninoff on our 1907 Blüthner – the composer’s favorite brand.

Gusev dedicated last weekend’s performance to the memory of his beloved teacher, the late Allan Evans, with whom he studied at Mannes and whom he credits with teaching him to play Chopin.

In its overture, the Graceful Waltz in A minor, Op. 34, No. 2, Gusev’s idiomatic use of rubato, and independence of right and left hand signal, marked his studies with Evans, whose Arbiter label released remastered CDs from the early 20elast century recordings of great pianists trained in the 19e century. The rhythmically freer style, which emphasizes the left hand and the rhetorical “conversations” between the voices, is particularly well felt on European pianos.

Gusev played each half uninterrupted by applause, supporting the charm of the music. In the Nocturne in F major, Op. 15, No. 1, Gusev skillfully conveyed the dramatic contrasts between the opening and closing lyrical sections; in the passionate mid-section, he capitalized on Erard’s clearly articulated bass register and liquid highs.

The Ballad No. 2 in F major, Op. 38 again showcased Gusev’s virtuosity, with sharp contrasts between his soft and stormy passages, and plenty of well-defined interactions between the recorded vocals.

The famous Mazurka in B minor, Op. 33, No. 4, an example of Chopin’s love for this Polish dance form, provided Gusev with more opportunities for rubato, color, and some particularly lyrical melodies in the high notes.

Scherzo No. 1 in B minor, Op. 20 with its tumultuous beginning and almost chaotic end, bracketing the tender recurring theme of the Polish Christmas lullaby, Lulajze Jezuniu, closed the first semester. What must this melody represent among Chopin’s childhood memories?

At the end of the Scherzo, cries of “Bravo!” ensued, with a few listeners immediately jumping to their feet. Gusev himself seemed to take a moment to return to the present, like someone waking up from a fascinating dream. It seemed logical; Gusev plays as if totally absorbed: body, mind and soul. Most of the time his eyes are closed or, if open, seem not to see his real surroundings. It seems his natural way of playing rather than an affectation.

After a brief intermission (during which the audience convinced the pianist to take off his formal black jacket for the second half, given the hot temperature in the hall), the concert continued with the Barcarolle in F sharp major, op. 60, a work well suited to Erard’s liquid tones.

Chopin’s Sonata No. 3 in B Minor, Op. 58 calls for a formidable palette of piano effects: the first movement, Allegro maestoso, begins with a majestic passage, followed by a sublime high-pitched melody, which becomes rhapsodic. The Scherzo, molto vivace features nimble fingerplay alternating with lyrical sections. The majestic beginning of the Largo is followed by beautiful cascading sequences in the right hand, then a kind of promenade, and ends with a soft melody which fades into a whispered pianissimo. The finale, Presto non tanto, offers both passages of unbridled urgency, like someone struggling against mighty forces, and the scale of the fleet runs over the instrument’s compass. Gusev clearly satisfied his listeners on all counts. They called him back for two encores, both Opus Posthume: Mazurka in A minor, B.140To Emile Gaillard, and Mazurka in A minor, B.134, Our time.

This concert, along with the two previous performances by Ivan Gusev in the Historic Piano Concert Series, can be streamed for free HERE on “Music from the Frederick Collection”.

Patricia H. Frederick, general manager of the Historical Piano Concerts series, grew up at Boston’s Symphony Hall, where her father, Laning Humphrey, was a BSO publicist, director of public relations, and also a program annotator for the Pops. She has taught music at the college level and is a church choir director and organist.