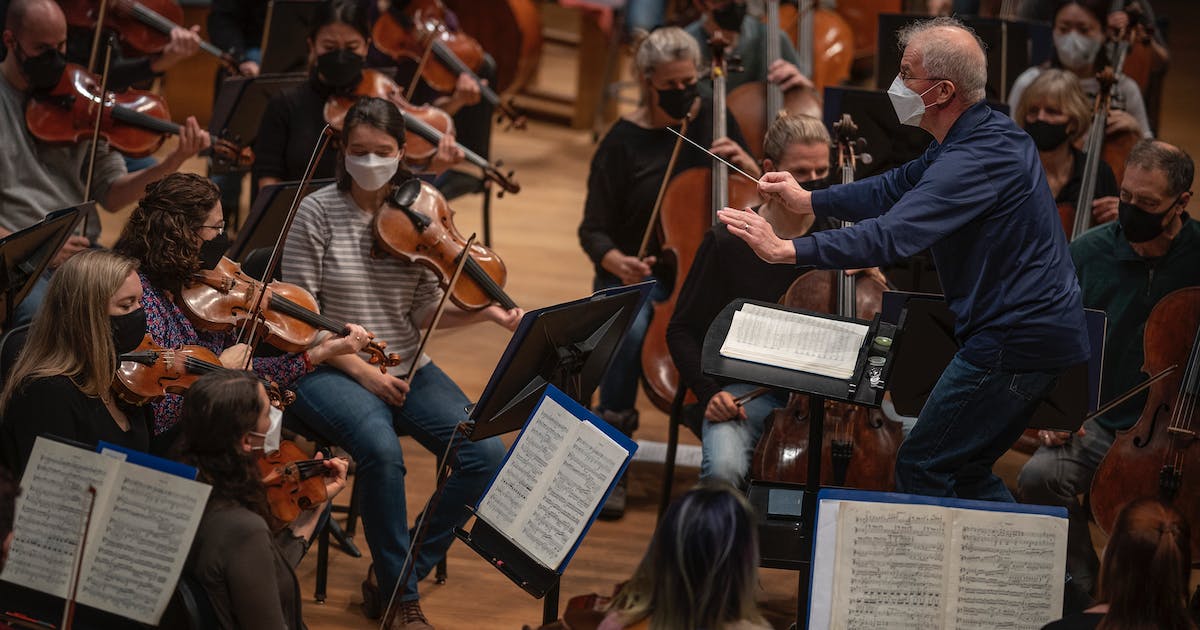 In the symphony’s finale, full of brass and grandeur, Music Director Osmo VÃ¤nskÃ¤’s baton was still outstretched, the string players’ bows still hanging in the air, when the howls began.

Composer Jean Sibelius is not a fan favorite in every concert hall. But here in Minnesota, Sibelius is synonymous with VÃ¤nskÃ¤, the beloved musical director who, after 19 years with the orchestra, will be retiring this summer.

VÃ¤nskÃ¤’s path with his compatriot Finnish is what put him on the map, which led him to Minnesota, which helped to anchor him in the hearts of the public here. So, in this final season, for the first time, the orchestra plays the composer’s seven symphonies in a three-week Sibelius festival that serves as a celebration and a farewell start.

â€œMinnesota audiences know how much Osmo music really is – and because of that, the music of the Minnesota Orchestra,â€ said Erin Keefe, concertmaster of the orchestra and wife of VÃ¤nskÃ¤. “Because this is Osmo’s last season, there is no better repertoire to play.”

With any composer, VÃ¤nskÃ¤ said: â€œI try to breathe and live through these emotions, what the music gives me. … With Sibelius, it’s always the deepest path possible.

In an hour-long interview in his bright office at Orchestra Hall, VÃ¤nskÃ¤, 68, described his story with the Finnish hero.

Every time he opens his decades-old, well-branded and cardboard Sibelius scores, which he has worn on catwalks around the world, “all the old discoveries are there,” he said. “But then you see something, like an extra. It’s the same package over there, but then, hmmm, there’s that connection too, yeah.

“The vision grows a little bigger each time you do it.”

Other drivers stretched Sibelius down, slowed it down.

It’s an urge that Sibelius himself understood, said VÃ¤nskÃ¤. “He said that sometimes when a good orchestra is in front of me it sounds so good that there is a temptation to slow everything down more and more.”

He stopped, smiled: “He said understanding that it was a mistake.

A â€œmusic fundamentalist,â€ as one musician called him, VÃ¤nskÃ¤ sticks to the score, conducting Symphony No. 1 to a clip that may sound a bit wild, sparking complaints from string players.

He considers it his duty to capture the composer’s notations, to feel them in his body, to transmit them to the musicians. He’s also comfortable with the strains of Sibelius, never anticipating release.

“With music you have to go through the tension sometimes,” he said. “The point is not to try to get rid of it as soon as possible. The deeper you can go with that feeling, then something that comes out of it is also bigger.”

So, VÃ¤nskÃ¤’s insistence on the darker gloomy, the more calm calm.

A New York Times reviewer described it in a 2016 review as “burning patience.”

And if Sibelius doesn’t provide relief, VÃ¤nskÃ¤ doesn’t add it. Symphony No.4, which Sibelius wrote with a tumor in his throat, convinced that his death was near, ends without the elevation that another composer could have offered.

â€œThe end is likeâ€¦ I’m going to go away but life goes on,â€ VÃ¤nskÃ¤ said, tracing a straight line in the air with his palm.

“Life goes on but without me.”

Sibelius opened a door for him

The driver was only 4 years old, but he remembers the room they were in when she told him. Their was a hotbed of classical music; his parents turn off the radio when jazz or popular music starts playing.

At the age of 18, VÃ¤nskÃ¤ landed his first job as a professional musician, playing the clarinet with the Turku Philharmonic Orchestra, Finland’s oldest orchestra.

His first concert, broadcast nationwide, included Sibelius’ Symphony No. 1 – which begins with a clarinet solo. The local reviewer noted the new solo clarinet and wrote that “it looks like they made the right decision,” VÃ¤nskÃ¤ said.

As he rose through the management ranks, Sibelius’ works offered him a chance to perform internationally.

â€œOrchestras outside of Finland, when they want to do Sibelius symphonies, they invite a Finnish conductor,â€ he said. “To give some kind of authenticity, whatever that means. …

“It has been an open door for many of us.”

VÃ¤nskÃ¤ gained international attention by conducting the once obscure orchestra in Lahti, a town of 100,000 people in southern Finland. Record label BIS was looking to capture every note Sibelius had ever written – “a big, big project,” as the conductor put it – and enlisted Lahti.

The orchestra’s signature Sibelius collection of 68 records was widely and internationally admired for its honesty.

When rumors emerged in 2001 that the Minnesota Orchestra was about to choose VÃ¤nskÃ¤ as their next musical director, articles praised his work with the BBC Scottish Symphony Orchestra and its guest conductor in Chicago and Cleveland. But they focused on Sibelius.

In Minnesota, at first, the conductor didn’t want to program Sibelius, “didn’t want to be cataloged,” said Douglas Wright, principal trombone. “He wanted to be a little more complete in what people knew about him.”

But after delving into Beethoven and other composers, the orchestra began to sprinkle with Sibelius. As musical director, he has conducted over 300 performances of the Finnish’s works.

When BIS asked VÃ¤nskÃ¤ to record the entire cycle of Sibelius symphonies with the Minnesota Orchestra, â€œI said, ‘Why?’ Â», He said. They reminded him: It had been 15 years since Lahti’s recordings.

â€œSo the question was, am I the same person who made those early recordings? “

They recorded the grim Symphony No. 4 amid the turmoil, just ahead of a 15-month lockout that precipitated VÃ¤nskÃ¤’s resignation. Musicians’ frustration with the board and senior management “fueled her in a way,” Wright said. “We all felt angst, and this music is very scary.

“We just have to put our emotions into this music.”

In 2014, a few weeks after the lockout ended, the orchestra learned that the album with the first and fourth symphonies had won the Grammy Award for best orchestral performance.

One Wednesday morning before the festival’s first concert, VÃ¤nskÃ¤ jumped onto the podium, unhooking his wristwatch and placing it on the stand in front of him.

â€œThe Finnish way of saying right now is ‘Have a good rest of the year’,â€ said VÃ¤nskÃ¤. He just offered a brief break for the musicians’ laughter before moving on to the music.

He arched his staff and the ropes began to climb.

While they rehearsed, VÃ¤nskÃ¤ rarely stopped, mainly to urge the musicians to calm down, more calmly, even more calmly.

To notice a sudden change in volume, he lowered his knees. To silence the ropes, he closed his left hand into a fist, then closed his eyes as well.

“Softer!” he ordered the timpani, reaching out to his mask. “Softer!”

Every now and then he would tap the stick with his stick, noting a tempo or dynamics. But the orchestra often played this symphony, so that their scores bore the marks of past rehearsals, past recordings.

At one point, the violins swelled, returning to a warm and majestic melody as the flutes whirled.

But this time, he didn’t squint. For several moments, he didn’t try to coax a particular sound. His serene face, his body swaying gently, he looked like a person listening to a piece of music he had loved for a long time.

This weekend: Symphonies Nos. 1 and 6, plus the original version of his Violin Concerto with soloist Elina VÃ¤hÃ¤lÃ¤, 8 p.m. Fri-Sat.

January 15-16: Symphony No. 5, with commentary by VÃ¤nskÃ¤ and the violist of the Sam Bergman orchestra.