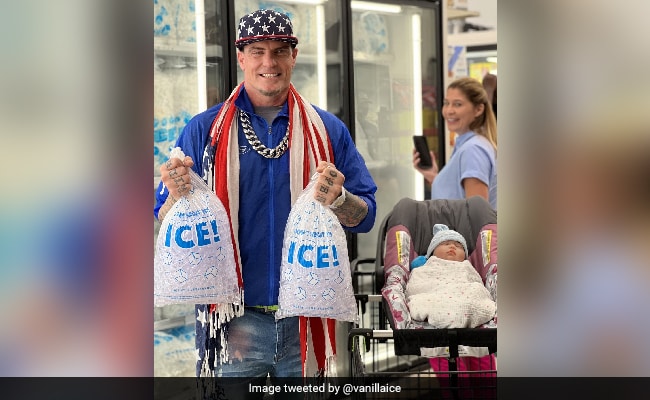 How cool is this picture? (courtesy vanilla ice cream)

Do you remember the Vanilla Ice sensation from the 90s? Yes, we’re talking about the pop sensation who invented the song Baby Ice Cream. How can we forget it, right? The number and its sassy lyrics won many hearts around the world when it was released. But why are we talking about it now? Well, Vanilla Ice, aka Robert Van Winkle, is back in the headlines and how. This time, the rapper gave something fun to remember his signature song. He tweeted a photo that reminds us Baby Ice Cream. And he does it in a funny way. Vanilla Ice tweeted a photo where he is seen holding two bags of ice cream. On the right of the photo, we see a baby. Well, of course, this photo is simply a visual representation of the song title. The caption read, “When an opportunity like this comes around, you gotta do it.” He added the hashtag “Ice Ice Baby” and “Having fun”. Looked:

When an opportunity like this presents itself, take it… #IceIceBaby#Enjoypic.twitter.com/Tr0cnCLi9N

People on Twitter were amused by this performance of the song. Someone wrote that she was sending this photo to her mother to see.

others have called Baby Ice Cream a classic not to be missed. “Still a classic to this day. The party continues to ring when the bass kicks in. Baby Ice Cream,‘ wrote one person.

Still a classic to this day. The party continues when the base comes in. Ice Ice Baby.

People remembered the iconic song and commented on how the track has stuck with them over the years. One user wrote, “I’m not gonna lie. Every time I get an ice pack and it sings baby ice cream I think of you. Always a good one.”

I’m not going to lie. Every time I get an ice pack and he sings Ice Ice Baby, I think of you. Always a good one!