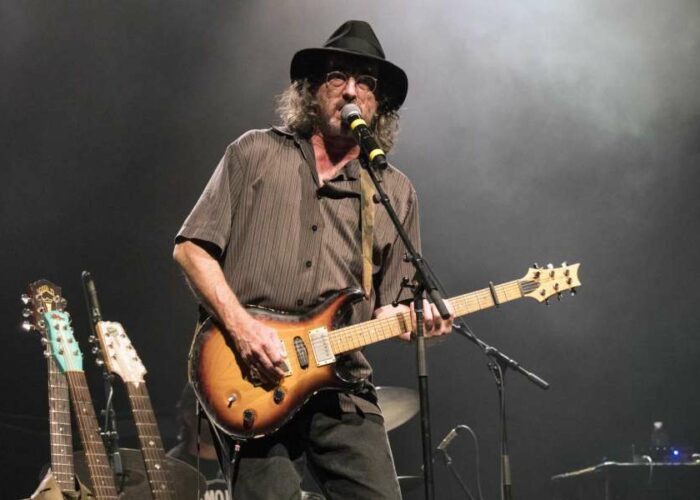 James McMurtry performs at the Saenger Theater Mobile on January 7, 2018 in Mobile, Alabama.

I can’t say that talking to James McMurtry is like wrestling a bear because I have never wrestled a bear. But years ago – driven less by admirable carpentry skills than a lack of funds – I hung a solid-core interior door on a bathroom myself. The process was laborious and frustrating. I made a lot of mistakes. Unlike a recent conversation with McMurtry, however, hanging up the door was not a short process.

While speaking to McMurtry recently about his new album “The Horses and the Hounds”, two icebreaker attempts instantly melted away. A volley attempting to force its way into a conversation about Robert Penn Warren provoked irritation at best, offense at worst. I was trying to use the title of McMurtry’s song “Blackberry Winter” to talk about Warren and his short story with the same title. Hope: Another writer’s work might prove to be a nicer subject for McMurtry than his own songs. The tact did not work.

I thought the idea of ​​youth contrasted with age and how a narrator’s age can impact a potentially unreliable narrative had some commonality.

Details: $ 24; theheightstheater.com. Visit the venue’s website to learn about the additional security protocols in place for this show.

“The title had nothing to do with the song.”

Sometimes the conversations are like a fight. You do not know that you have come from a time too late until it is too late.

But laborious and forced conversations do nothing to improve or diminish “The Horses and the Hounds,” which is McMurtry’s tenth or twelfth release depending on whether or not you count live albums. In his case, I do, because he’s known for slipping devastating songs like “Lights of Cheyenne” onto live albums, which other songwriters serve as placeholders. Producer Ross Hogarth – who recorded McMurtry’s first two albums – oversaw strained musical support for the lyrics and captured the liveliest vocals in the songwriter’s career.

The writing – with McMurtry still an attribute capable of attracting admiration and awe – continues to impress with its syllabic thinness and grainy richness. If McMurtry has ever seen the meter as an opponent, he has clearly defeated his rival. Sometimes on this album he uses proper nouns that seem so oddly formed and obnoxious (I mean, “Sopchoppy” …) that you could apologize for thinking he was creating puzzle challenges instead. than writing songs.

But the ecosystems it creates are deeply designed and felt. The 48 minutes of “The Horses and the Hounds” are hermetic in that they erase thoughts about time relative to the album. There isn’t a dreaded song to skip in the middle. But the passage of time, which passed through McMurtry’s debut album over 30 years ago, remains its friendly or hostile rival.

The passage of time

Age and aging are threaded throughout the case. The subject may seem different from McMurtry, as the late baby boomer born in 1962. Asked about age as a theme, he shrugged, “I’m almost 60 years old. . . “

Nonetheless, he speaks wittily about it in the chorus of “Ft. Walton Wake-Up Call “:” I keep losing my glasses. “And he offers a startling verse in” If It Don’t Bleed “:” Now that’s all I can do to get out of bed / he there is more in the mirror than there is in front. ”Another refrain, in“ Canola Fields ”, oscillates between gravity and laughter:“ You can’t be young and do that ”.

We learn along the way. Or we hope.

Some songwriters readily immerse themselves in their process. McMurtry doesn’t think it’s that interesting, or he’d rather not talk about it.

“I start with a line and a melody in my head,” he says. “I build from there. And I listen to the lines and I’m like, ‘Who said that?’ It may be a character. Sometimes a story comes from that character, and it goes into a chorus-to-verse structure. “

McMurtry insists that the stories about “Horses and Dogs” have all gone this route. His process, he insisted, is his process. And I give him that. But “Vaquero”, to my ears, sounded like an outlier: it is dedicated to Bill Wittliff, writer, screenwriter, editor, photographer, archivist and family friend who founded the Southwest Writer’s Collection and the Wittliff Collection, both. at Texas State University. Wittliff died in 2019.

The first lines are: “I don’t pick up the newspaper, I don’t watch TV / I was on the road when the word hit me.

The “word” being a text on the death of Wittliff.

But all this about a line, a character and a story. . . that does not apply here?

I have found that writers reluctant to discuss writing sometimes speak of self-publishing. And McMurtry found it a little nicer. “I am constantly rewriting,” he said. “Before I had a computer, I kept revisiting pages of notepads. Sometimes a song took up an entire notepad. There are several that have never been finished. Guess I found out later they sucked.

McMurtry sold some of these densely edited legal blocks last year to the Wittliff Collection, which archives documents from writers such as McMurtry’s father, Larry, Cormac McCarthy, Joe Lansdale, Willie Nelson, Sam Shepard. His work is in good company, that’s for sure. It is also in deserved company.

Like many other writers in his field, McMurtry has seen album sales wane. Touring is where he can make a living, and touring stopped last year. “We used to tour to promote the album, now we’re releasing the album hoping you write it for people to come to the shows,” he said.

Which brought us to our short, tense, but not entirely unpleasant conversation.

As for the process, he admitted that he often needed a deadline to finish his songs and albums. Producer Hogarth booked time at a California studio owned by Jackson Browne, forcing McMurtry to complete his 10 songs.

His first three albums were released on Columbia. Despite receiving good reviews for his 1989 debut, “Too Long in the Wasteland,” the follow-up lasted over a year after he handed it over to the label. Now the albums come out every six or seven years. He owes nothing to Columbia. He works for a dedicated audience that includes author Stephen King and other songwriters such as Jason Isbell and people who appreciate the craftsmanship of his songs. As for the conversation, he releases his music on his terms. Every few years they arrive in a shiny little package.

Songs should be consumed based on their attributes rather than my interpretation of their attributes. But for those reading this, unfamiliar with his work, their attributes are both big and small. I didn’t get much out of McMurtry over the three-plus decades that he wrote sensitively and with great nuance about female characters. But that’s exactly what he did despite his patriarchal origin of songwriting when it came to Texan singer-songwriters. The late and great Guy Clark wrote wonderfully on women, but he was an outlier, as was McMurtry.

McMurtry was perhaps a little more comfortable talking about how he remains steadfast in his dedication to only playing on outdoor venues or indoor venues that require masks and vax cards. Although even there, McMurtry doesn’t bother to elaborate. The choice is binary: the show takes place with precautions to ensure the safety of performers and listeners and it does not happen.

When “Too Long in the Wasteland” came out decades ago, famous music critic Robert Christgau said, “It’s going to be a piece of prestige, wait. Across a dozen albums, six labels, over 100 songs, McMurtry has done it even though the notion of “prestige object” has changed over the years. He found admirers by doubling the skills displayed on this first record. He trusts songs to speak for him. He trusts stories to inform songs.

So I learned that maybe it was best for me to leave McMurtry’s music to my mind and ears, where it offers uncomfortable truths about the way we go about our lives, but not uncomfortable conversations about writing. I admire this set of 10 songs even more than the 11 that introduced me to McMurtry in 1989.

Challenged by both carpentry and science, I also learned when summer came, never to hang a solid core door in the dead of winter.