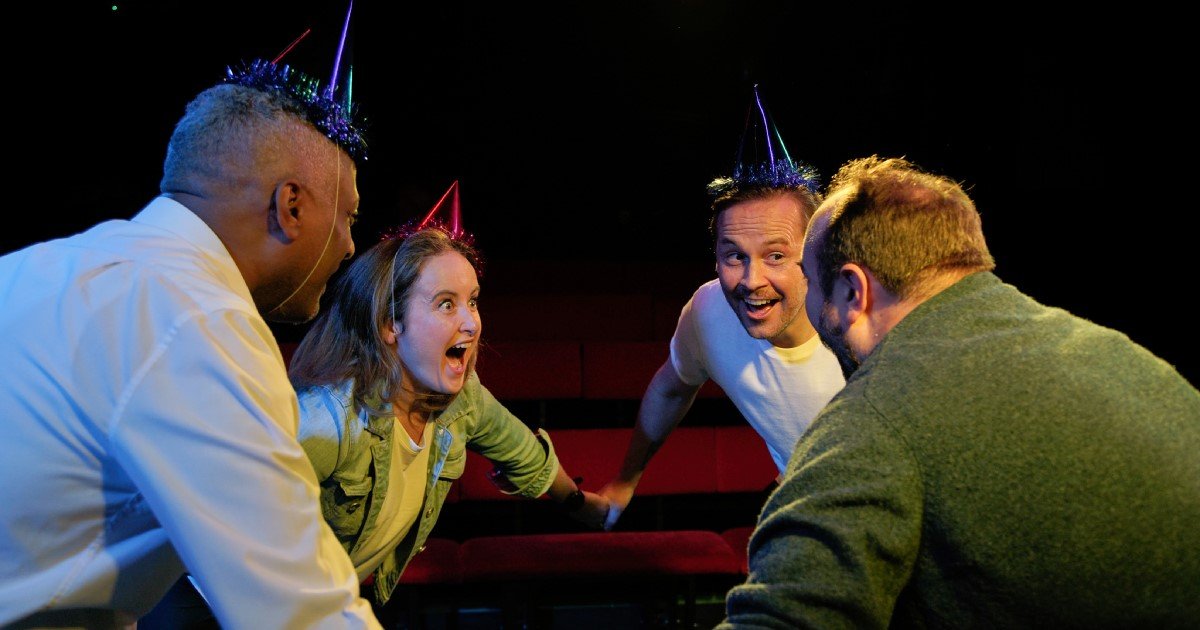 Therapy was never for me. The counter argument is that I can’t know without trying it. Maybe I don’t want a joint venture with someone for whom I can only make progress in hourly increments, for which I have to pay large sums: and why do therapists, like Sebastian (Roger Parkins) end up in therapy themselves? It would seem that he cares so much about his clients that he ended up neglecting his own well-being, but how did he do it, as a psychotherapist (the distinction between that and a physiotherapist becomes apparent in the one of many hilarious scenes in this one-minute laugh show), failing to recognize the signs that all was not well in his own life and taking mitigating action accordingly?

It’s a world that let’s take a break here gives a lot of information about, and from what I’ve seen here, it’s a world I’d like to continue to stay away from, thank you very much. A very distinctive cast of characters makes, at least, good theater. Summer Breeze (Kate Loustau), as she calls herself, is able to “reminisce” about past lives, in which she apparently served in the court of Henry VIII and, centuries later, found herself on the journey inaugural of the RMS Titanic. Sebastian observes that she is a westerner who has declared herself an eastern mystic. Being part of the “all men are inherently evil” brigade, it’s odd that she didn’t insist on having a therapist who identifies as a woman.

Then there’s Tunde (Chris Rochester), a stand-up comedian who wryly observes from personal experience that growing up during Sierra Leone’s civil war gave him the resilience to withstand Saturday nights in downtown Barnsley years later. A long scene allows Tunde to go into detail about what happened, not so much to him as to his immediate family members, and it is through his story that the holistic nature of psychotherapy becomes obvious: everything is, even largely, linked to everything else, and therefore a person’s problems cannot be tackled in isolation.

Ultimately, though, it’s a show written for laughs. Some come courtesy of Roberta (Abigail Williams), Sebastian’s ex – having recently seen production so innocuous it was bland, it’s refreshing to hear someone speak so candidly. It’s almost a shame that Roberta and Summer never meet. There’s also Babooshka, otherwise known as Babs (Kate Loustau), Sebastian’s (or is she?) current significant other from Kate Bush.

The characters on stage are rounded out by Barry Bremner (James Marchant), a stereotypical alpha male who yells on the phone who he’s talking to on a morning rush hour commuter train, with obnoxious remarks. Sebastian defends himself in a rather contrived way, but again the comic effect is strong. Presumably written before the pandemic, everyone seems to spend an exorbitant amount of time on moving trains, whether mainline or London Underground, and this production does a brilliant job of capturing the crowded conditions on board thanks to a combination of movement, non-movement and sound effects.

Even the most stoic therapists find that, like Sebastian, their mind wanders from time to time, and the audience gets a glimpse of Sebastian’s mind, invariably when a client says something that triggers a song, and therefore a song. , in her head. It’s a tactic that gets slightly overused by the end. All things considered, a mix of hilarity and emotion makes for a very satisfying evening.

Even therapists have bad days. Sebastian would know.

To his own problems are added two new clients who bring two new challenges. Summer: a new-age Californian with childhood trauma, and Babatunde: a comedian and survivor of war-torn Sierra Leone.

If he can just spend the day seeing the love of his life, she will surely make it all better. Because she loves him too… doesn’t she?

A dark, funny and unpredictable new play about therapy, self-awareness and dealing with your problems.

Contains references to suicide, sexual abuse and depictions of violence.