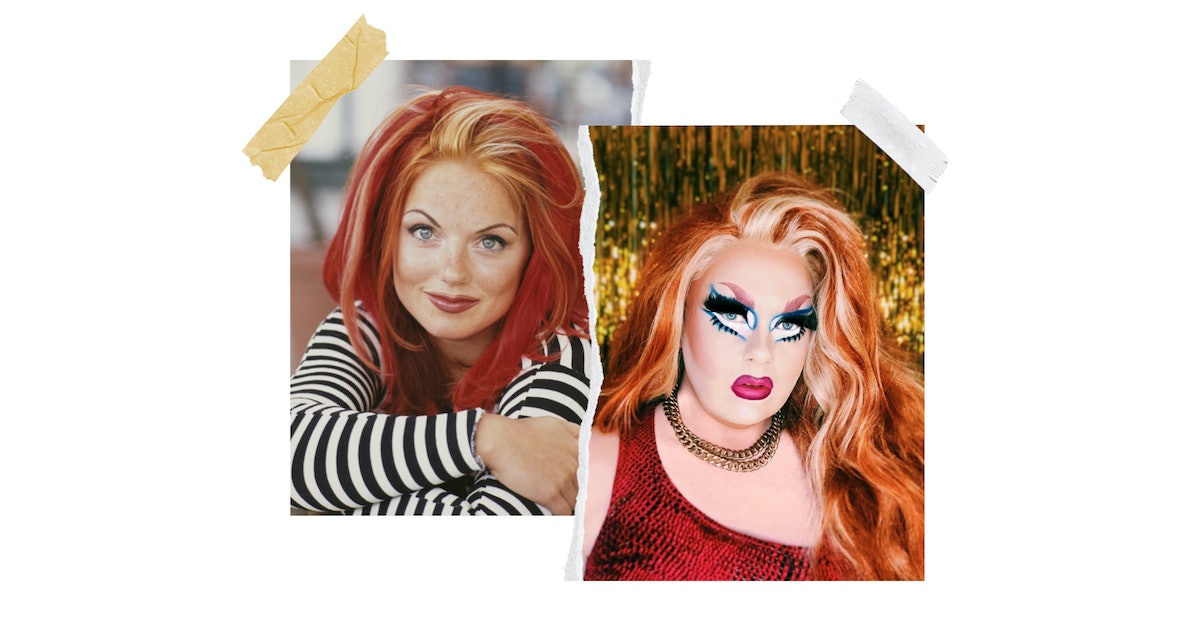 A quarter of a century after the release of their groundbreaking debut album, the nostalgia for all that The Spice Girls has come to a head. With a limited edition album reissue and reflective Channel 4 docuseries Spice Girls: How Girl Power Changed Britain, the spirit of Ginger, Scary, Sporty, Baby and Posh continues to thrive in 2021.

Amid this renewed appreciation for the legendary girl group, east London drag performer Just May, who has been beating the Spice Girls’ drum since the start of their drag careers.

Throughout their eight years in the industry, May has created a dedicated Ginger Spice onstage character and has firmly established himself as one of the leading Geri imitators in the world. With drag shows including What made Geri Ginger, May takes a look at the music, fashion, and attitude of their favorite Spice Girl on a regular basis, paying homage (and a bit of a good laugh) to the woman who continues to influence their lives and careers so deeply.

Below, I talk to Just May about their earliest memories of the BRIT Award winner, how she still manages to inspire their drag style to this day, and the lasting impact of the Spice Girls.

First of all: Geri or Ginger?

For me, she is 100% Ginger. I base all my looks and everything I do on Ginger Spice rather than Geri herself.

What is your earliest memory of Ginger Spice?

The Spice Girls were playing “Wannabe” on GMTV and Ginger wore this blue-green outfit. I remember so clearly.

It’s funny because when the Spice Girls first came out Baby Spice was my favorite, but that quickly changed. I remember seeing so much of myself in Ginger. She was still the loud redhead and I was the loud redhead kid.

Have you met Ginger already?

I once went to a recording of Room 101 and she was one of the guests. I showed up wearing a full Ginger Spice outfit and someone pointed out to me. I waved frantically and she sort of looked at me and said “hello”.

When did you decide to become a Ginger impersonator?

I have always been obsessed with it. Even in my teenage years, I had Spice Girls records hidden behind any emo CD I pretended to be in at the time.

One evening I arrived at a friend’s 90s-themed birthday party straight from my normal job. I didn’t have time to buy an outfit, but my mate went out and bought me a really crappy Union Jack dress from a charity store. I put it on and I was like “Wow, that’s it”, and that’s kind of where it all started.

How has Ginger Spice influenced your drag style?

I have all of Ginger’s famous outfits, but I don’t necessarily dress the way she would. I love red and ’90s fashion, but I generally stick to Ginger Spice hair with the blonde highlights. I love wearing outfits like the Union Jack dress because it’s so fun and silly. But, for me, the hair is what made Geri “Ginger Spice”.

â€œI’ve always been obsessed with Ginger. Even in my teenage years, I had Spice Girls records hidden behind any emo CD I pretended to be in at the time.

What are your favorite Ginger Spice looks?

One is a white dress she wears at the start of the World of spices movie. It has “girl power” written on the breasts and “female” on the leg. Another is a two-piece she wore at the Cannes Film Festival. It was a rainbow colored chest tube with flared pants. So, so ugly. But I love this.

Ginger left the Spice Girls in 1998. Tell me about your memories of that fateful day.

My mother worked in a school as a cleaning lady and I sometimes had to go with her. One day her coworker approached me and said, “I bet you’re really sad that Ginger left the band.” So my mother must have shown me the newspaper she was hiding from me. I just ran into a classroom and cried.

I loved it when she went solo, however. I was like “give me this” and completely digested it. I bought all the CDs and still have all the tapes. She did very well on her own and for a long time was the best-selling female solo artist in the UK.

What are your favorite Geri solo songs?

If I play, I love “Mi Chico Latino”. Mainly because of the Spanish rap at the end, although that doesn’t make sense. She also did a song called “Lovey Dovey Stuff” with Sean Paul. It’s only available on Youtube and it’s actually pretty camp. You have to listen to it because I just want to put this song in the top 10 on my own someday.

You had a show called What made Geri Ginger. So what exactly did Geri Ginger do?

The show is an exploration of this question. He breaks down everything from clothes to hair and attitude. And, really, what made Geri Ginger was that everyone was projecting these things on her. So deep.

How do the audience react when you play as Ginger?

When people look at me without understanding, I can usually tell they are in their early twenties. But, the majority of people are in the joke – they understand that the act is a great Ginger Spice cartoon character.

How has your relationship with Ginger Spice changed over the years?

It is the same. I loved her back then because she was kind of a human cartoon character, and now she has adapted that Ginger character to who she is today. But, I’m sure old Ginger Spice still lives deep in Geri Horner somewhere.

The Spice Girls just made great pop music, which means they’ll always stand the test of time. Each song had a funny post about things we all could relate to, like friendship, getting laid, wearing condoms, and saying goodbye. It’s just perfect pop.

Moving on to the Spice Girls as a band, what’s your favorite song from the band?

“Who do you think you are.” It’s 100% a bop. But my favorite song to play is an acoustic version of “Wannabe”. Geri played it once on Australia has talent. It’s so serious and completely different from the original.

We recently celebrated the 25th anniversary of “Wannabe” and people still love the Spice Girls today. What is their appeal?

The Spice Girls just made great pop music, which means they’ll always stand the test of time. Each song had a funny post about things we all could relate to, like friendship, getting laid, wearing condoms, and saying goodbye. It’s just perfect pop.