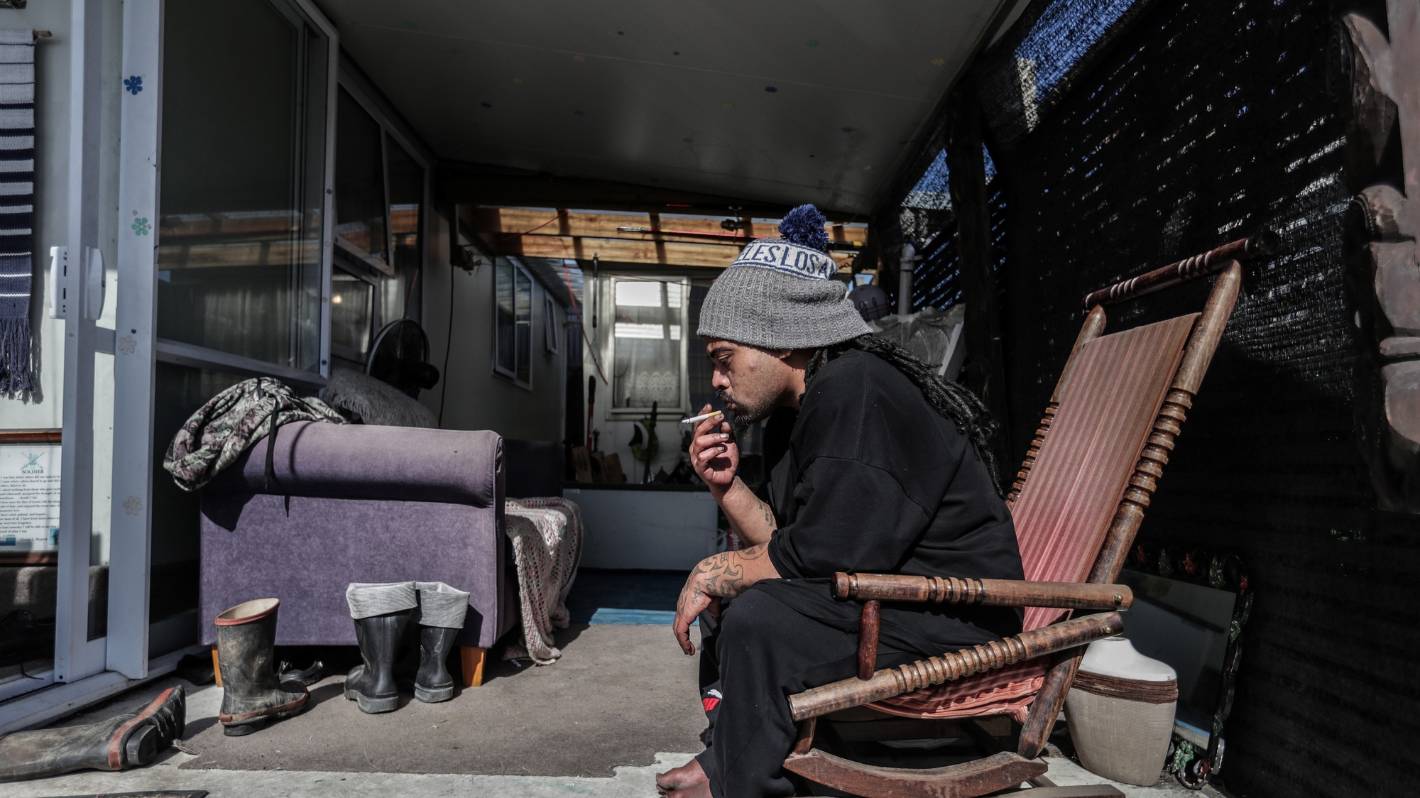 Homeless and sleeping on a cardboard box under a bridge ten years ago, Hautapu Toka, who was born with spina bifida and spends most of his time in a wheelchair, has found solace and healing in music, writes VICKI ANDERSON.

Shoppers carrying brightly colored gifts and bulging bags walk past Hautapu Toka as he walks barefoot from his wheelchair outside a Christchurch shopping mall.

Ten years ago, Toka, who calls himself Bob Māori because he likes the musical styles of Bob Marley, was homeless and slept on a cardboard box under a bridge in the city center.

Born with spina bifida, doctors warned his parents that he would not survive.

“When I was born, my spine wasn’t fully connected like everyone else. I had so many operations to make my life easier,” Toka says from his home in a caravan park, which he shares. with his parents.

READ MORE:
* Homeless woman killed in parking lot remembers her cheeky nature and striking blue eyes
* Auckland City Mission spreads Christmas cheer with lunch for hundreds
* An Auckland man will walk 325 kilometers with a walker for a charity for the homeless

“I was born then taken from my mother and spent my first six months in an incubator. I should have died, I should have left when I was a baby, but I’m still here.

“It’s amazing that I’m still here and the doctors are still amazed to this day.”

From the waist down, he underwent 50 operations. His legs are “pretty much all metal”.

From the waist down, he underwent “at least 30 operations”.

For the past 13 years, he has not slept in a bed because of the constant pain he endures when lying down. He sleeps sitting upright in an old chair in a cramped space, wheelchair folded at his side, a poster of Bob Marley behind him.

“Most of my problems are related to walking, trying to move around. After walking a distance, if I sit for too long, my body starts to seize up and it’s hard for me to get up,” says- he.

“I have to put all my joints back together. It can happen 10 times a day. It’s not a life I would wish on anyone, but it made me who I am.

The one constant source of comfort in his life is music.

Toka started playing the guitar as a young boy, inspired by his grandfather, who played the violin.

“I love old school music. I picked up a guitar and taught myself, trying to replicate the sounds I heard on the radio,” says Toka.

“Music is my peace, music is my pleasure and the only thing that can make me smile today. Once I have music, nothing else matters.

Growing up with a disability was difficult.

“Going to school and having to deal with a disability…most of my time was spent pretty much by myself,” Toka says.

“The teachers sometimes made fun of me. I had no friends at school, only family. When people laughed at me, judged me for what I had, my disability, fists flew and my family helped me.

A year ago around this time, social services kicked into high gear to quickly get homeless people off the streets to confine them. (Video first published in March 2021)

“I didn’t want to live. I wanted to die so many times, but I’m glad I didn’t.

During his high school years, he switched to homeschooling and found that his academic performance was improving.

“Then I got tired of staying home, being alone, confined to my room,” he says.

“I widened the gap.”

At 17, he was a rough sleeper, living in a cardboard box under a bridge in central Christchurch.

“I got tired of following the rules, really,” he says.

“I chose to live on the streets where there were no rules and I made my own rules. My siblings chose to follow me. For a good year I lived in a box under a bridge. I thought that was cool, but it was dumb, probably one of the dumbest decisions I’ve ever made.

Aged 18 in 2010, he was jailed for two years for his role in an incident where a 14-year-old boy was kidnapped and beaten up in Kivers Lane, a small lane between Cashel St and Lichfield St .

At sentencing, Judge David Saunders noted his disability and that he was living on the streets, sleeping on cardboard inside bicycle cages near the bus interchange.

His sentence was reduced due to his medical problems, early guilty pleas, and the fact that he had a lesser role in the crime. Judge Saunders considered a sentence of house arrest, but the family’s address was deemed inappropriate.

“I would never go back there, living on the streets. I did a stay in prison, I got out of it. Cleaned out of the system for 10 years now,” says Toka.

“For the past two years, I’ve moved in with my mum and dad, I wouldn’t be anywhere else. I like being at home. There is no better place to be.

He took a course at Ara in 2013 and became a certified brick and block setter.

“All eight of us on the course made it, but as soon as they saw me in my wheelchair, they looked at all the other brothers right in front of me, and they were hired.”

He decided to make a living from music.

Thinking of street work as work, he walks around barefoot in his wheelchair to perform around town, using his only real possession, his guitar.

In the last 18 months, Things followed his life.

When he sits outside The Warehouse in Hornby or on the streets of New Brighton, Toka sings songs of poverty, freedom and sunshine.

Some only see his bare feet and spilled hat full of coins outside their premises and move him quickly, but most respond kindly.

“I applied for jobs but because of my disability nobody wanted to hire me, so I chose to do my own job,” he says. “I took a guitar and went to play in the street. The music pays my bills, the electricity, the rent and I fill the cupboards, being careful not to starve.

A video of him on the street has been viewed more than 40,000 times online.

He has written some original songs and hopes to record them.

“I would like a job. Anything that works with my disability, like computer work. If I had the chance to be a mechanic, this would be my ideal job, something I can do with my hands without having to stand there because it hurts too much.

Toka’s happy place is in the voices of Frank Sinatra, Louis Armstrong and Bob Marley.

“I only play music that I can relate to,” he says, tuning his guitar. “I love listening to their stories. That’s what the music did for me, it caught my attention because of their stories.

“They were telling their truth, that’s why I sing it today.”