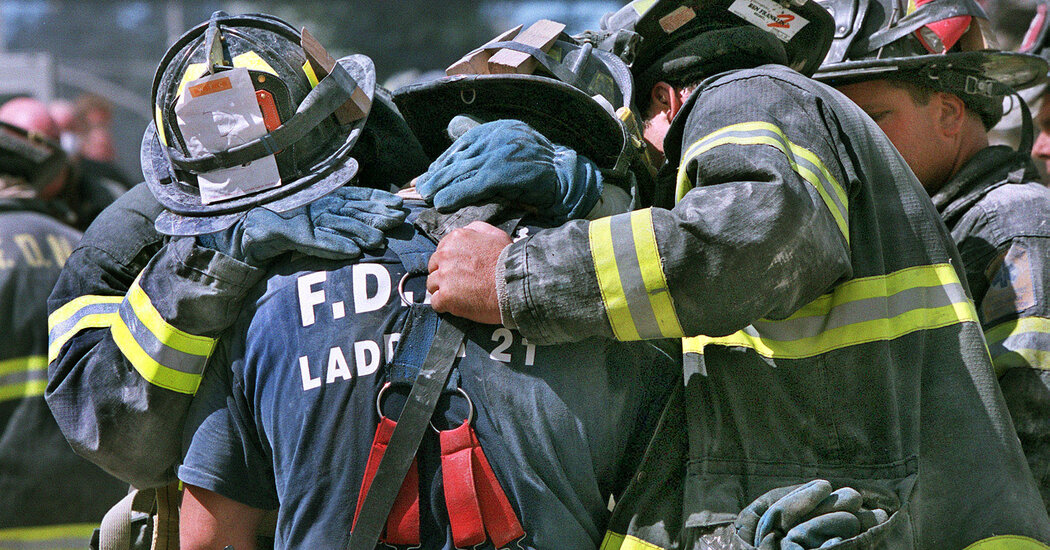 In 2002, The New York Times won the Pulitzer Prize for News Photography for its coverage of the 9/11 attacks and their aftermath. Two decades later, we asked our photographers to go back to their work from that time and reflect on the images they created and what it took to capture them. Their answers have been edited for length and clarity.

I was looking at NY1 when I saw a plane crashed into the World Trade Center. I grabbed my gear and ran to the Brooklyn Heights Promenade. My partner pointed to a plane flying over the Statue of Liberty, and I knew what was going to happen: I was going to see hundreds of people die. I remember thinking, â€œNo, no, no! But I breathed and I thought, â€œThis is ancient history. Do your job. â€I put the camera to my face, framed the skyline wide, and waited for the plane to enter my frame.

I try not to think about this day. I have witnessed the horror of losing New Yorkers – mothers, fathers, working sons and daughters, friends. I have nightmares; not sleeping well since September 11 has become the norm. The image of the woman frozen in time reacting to the fall of the first tower of the World Trade Center.

If I hadn’t swapped the long lens I had on my camera two days before; if I had not gone to the west side because the road was blocked; if I hadn’t stopped by then, out of breath after running towards the World Trade Center; if I hadn’t looked at the burning tower thinking, “Wow, it looks like it might collapse any second or second”, otherwise … I still don’t know why I was meant to capture this moment.

I heard glass shatter and a voice screaming through the darkness of the cloud of the first fallen tower. I crawled out of the emergency vehicle I had taken cover and made my way to the voice, inside the Stage Door Deli on Vesey Street. It was a surreal scene: firefighters, police and a few civilians were stumbling, catching their breath, spitting mouthfuls of mud, lit only by the eerily glowing lights of the display case containing cold meats and cheeses for the day’s sandwiches. Officer Richard Adamiak bent down, coughing. In the background of the photo is the entrance to the charcuterie. We should have seen a radiant sun come in on this beautiful September morning. Instead, the neighborhood was plunged into darkness.

Time contracts when I remember, and I’m back under an emergency vehicle, in complete darkness, with what looked like sandpaper dragged down my throat. Then I’m catapulted through Pakistan and Afghanistan, the Second Intifada and the Iraq War, then back to the United States. Watching the events unfold around the troop withdrawal with growing dismay sparked memories – of lost friends, of seemingly futile efforts – and I wonder: was it all in vain?

It took me a long time that morning to find a secret way to get past the perimeter of the police barricade to where the towers fell. As I climbed over piles of precarious rubble, two firefighters caught my eye. They were walking fast and I could hear their conversation. I learned that they were looking for a Ladder 21 firefighter, which they had just found. They rushed past me and I lifted my camera when they told her that her brother, also a firefighter, was known to be inside one of the towers when it collapsed and that ‘we thought he was dead. His shoulders slumped and he was embraced in a moment of shared grief. Initially, I would have liked the faces of the firefighters to be more visible in the image. However, over the years, I have come to appreciate their anonymity. To me, they became the symbol of the deep loss that so many people experienced that day.

It’s on the Brooklyn Bridge just after the Second Tower collapsed as an exodus of survivors slowly made their way out of the smoke and into the sunlight. I ran into Joseph Sylvester, who said he worked at the World Financial Center. He was covered in ashes and his head was bleeding from the debris that had fallen on him. He said he was looking for his father, who worked in the area. I will never forget how calm and silent they were. I think everyone must have been in shock – just in silence, slowly making their way to safety.

This photograph by Michele Defazio remains, for me, a reminder of the kindness of strangers. I think of her every September 11th. I watched Michele walk alone towards the Bowery, where a missing persons reporting post had been set up. Carrying her homemade flyers with her husband’s picture, her grief and worry overwhelmed her, and she stopped for the briefest of times. Strangers on the street also stopped to comfort her. The moment was fleeting. Shortly after this photograph received a Pulitzer Prize, I called Michele. It was important to me that she knew that her story was important to the story. We had a short and somewhat awkward conversation given the odd connection we now share. She told me that she was still working to come to terms with the loss of her husband and that she had established a scholarship fund in his name. In the days following the attack, we would learn that 658 Cantor Fitzgerald employees – including Michele’s husband, Jason – died in the attack. I later covered their memorial service, weeping myself as I photographed the vast sea of â€‹â€‹people who had gathered in their grief.

My mission was a funeral in Yonkers, for an EMS employee killed in the attack. The world press was there too, but after the funeral they packed their bags and left. I stayed for an EMT tribute which included a salute and music from a boom box. I shot three images in the rain at the end of a roll when Jay Robbins started to cry. I will never forget how it happened just as the music started playing. For me, it was difficult to look at this photo. It still breaks my heart.

What sticks to my mind is not the fire, nor the gray crushed concrete of the Pentagon, but the feel of the crisp autumn air and the relentless blue sky. Pieces of green jet structure were underfoot. I only had a few moments to shoot before the rescue teams and others dominated the scene. I knew this space well. It was on the way home from the office everyday. I had met two of the people on that plane. The moment the fighter jets passed overhead – as in a silent and angry tribute – I knew that American life would never be the same again.

In the weeks following September 11, I was tasked with photographing the aftermath – a landscape in Lower Manhattan and Brooklyn that has been irrevocably altered. There was a bitter, burning smell left in the air, and pieces of paper had been blown away as far as Brooklyn. While driving I saw a fire engine with blown windows, no longer red but covered with white ash and debris, which had been towed to the fire station, engine 226. When I glanced to my right, saw a moment unfold, and quietly took two pictures. Lt. Matt Nelson, left, reacts, as Tom Casatelli, the lone survivor of today’s truck, kisses the son of his fallen comrade, Lt. Bob Wallace. It’s a moment that still haunts me.

After the terrorist attacks, people put their differences aside for a while. American flags fluttered from the windows of Park Avenue. Memorials like this one in Union Square have sprung up all over town. Prayer and candlelight vigils were held regularly. People reached out and supported each other: the country collectively cried. Twenty years ago we were torn apart, but we came together, trying to be the best versions of ourselves. As we tear each other apart two decades later, I can’t help but ask: who won?

Saturday, September 15, 2001, outside St. Francis Assisi Church for the funeral service of Mychal Judge – a Franciscan friar, priest and firefighter chaplain from New York – who died on September 11 while administering the last rites at the World Mall. I was not allowed to move inside to photograph dignitaries and speakers: it turned out to be a blessing. The church was full, but a crowd gathered outside the Engine 1 / Ladder 24 fire station in front of the church, a team of mostly firefighters, some in old uniforms. At the end of the homily, the judge’s friend and brother Michael A. Duffy asked everyone to stand up, raise their right hands and give a blessing to Mychal, who had blessed so many in the life and death. The crowd in front of the barracks raised their hands and repeated the blessing he had given to so many others. And I too have been blessed.