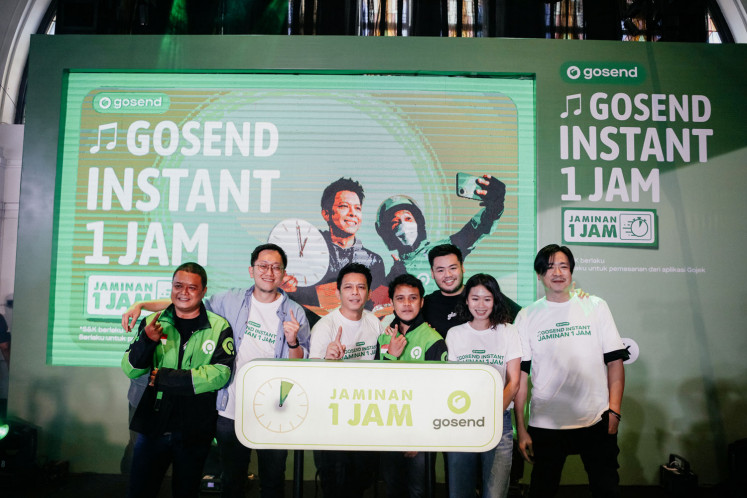 Besides promising fast and reliable delivery, the GoSend Instant Jaminan 1 Jam (GoSend Instant 1 Hour Guarantee) initiative also captured the hearts and minds of netizens with a music video and lyrical remake of “Ada Apa Denganmu ” (What’s With You) by Ariel NOAH.

The video was viewed a million times within 24 hours of being posted on several social media platforms.

Gojek Head of Logistics Steven Halim said GoSend Instant Jaminan 1 Jam came to the mind of the community with the commercial video, a collaboration between Ariel NOAH and GoSend.

“This achievement is inseparable from the creativity of the creative team at Gojek. We are grateful that the remake of ‘Ada Apa Denganmu’, which introduces the 1 Hour Guarantee service, has garnered a positive response from the public,” he said. he said, adding that the video has racked up over 150 million views across various social media platforms including YouTube, Facebook, Instagram and Tiktok.

The video invites NOAH fans to reminisce about the melody of the album‘s first single Bintang di Surga (Star in Heaven), but with the lyrics changed to “GoSend Instant 1 Jam, Jaminan 1 Jam”, which repeats throughout. along the song.

Additionally, scenes in the commercial are changed from the concept of the original music video, with the touch of Ariel NOAH trying to convince an upset salesman after the other chosen delivery service is late and receives complaints. of consumers.

The remake of the “Ada Apa Denganmu” music video also topped the record for the #CepetanGoSendInstant video, which was also a collaboration between Ariel NOAH and GoSend in 2021.

“Thanks to the remake of “Ada Apa Denganmu”, the new GoSend Instant Jaminan 1 Jam service is quickly recognized by the public, which has also quickly captivated users with its one-hour guarantee. We are optimistic that GoSend Instant 1 Hour Guarantee can be executed on the internal database; GoSend’s average instant delivery can be executed in around 30 minutes from pickup to drop off,” he explained, adding that 98% of GoSend delivery distances are short to medium from 0 to 20 kilometers.

“In the original video “Ada Apa Denganmu”, NOAH uses the concept of rewinding or rewinding, so we used the same approach. An interesting fact is that all the scenes were

done backwards during filming, including the pronunciation of words in Ariel NOAH’s script. For example, “Jaminan Satu Jam” becomes “Maj Utas Nanimaj”. Moreover, repeating the same words over and over again is also our unique way of communicating new products and sticking in consumers’ ears,” he said.

Bahari explained that the brainstorming process for the video involved many teams, ranging from the creative team, the marketing team, the research team to the sales team, with Ariel NOAH’s contribution being inseparable from collective effort.

Ariel revealed that every collaboration with GoSend goes through an unforgettable creative process, from the first time he tried to act funny to now being able to re-do music videos.

“The song “Ada Apa Denganmu” itself is currently one of the most well-known songs to the public. Many people have a nostalgic experience with the song, so we hope that the public can also sing along while listening to the remake version, knowing that now GoSend Instant offers a one-hour delivery guarantee.

“It’s interesting and I’m very happy to be able to sing this song again with a different twist with the creative team of Gojek. I hope the audience can enjoy the results of this creative creation and reminisce with me,” says Ariel, who is also a GoSend brand ambassador.

The remake video’s viral status has also had a positive impact on GoSend’s selling partners, in line with the growing recognition of the 1 Hour Warranty service.

“GoSend has become the preferred delivery option, with a 67% increase in Glatuk ice cream delivery using GoSend over the past two years. The one-hour guarantee presented by GoSend Instant really helps Glatuk provide peace of mind to businesses and consumers.

“In addition, delivery costs are also a determining factor when buyers seek to purchase our products; with the synergy of GoSend on Tokopedia and the delivery cost promotion, our sales have increased considerably. Nearly 100% of our total e-commerce sales currently use GoSend,” he explained. Recently, Glatuk and GoSend collaborated on a special package design, highlighting the excellence of GoSend’s fast delivery service.

With the 1 hour guarantee, GoSend will automatically send a voucher worth up to Rp 7,000 if the parcel sent using GoSend Instant takes more than 1 hour to deliver, and it is only valid for GoSend orders through the Gojek app.

A similar guarantee also applies to GoSend Sameday, which is six hours of delivery time. This guarantee is valid for the duration from the confirmed order to the finalized order, with a 70% reduction voucher automatically assigned to the user’s account.