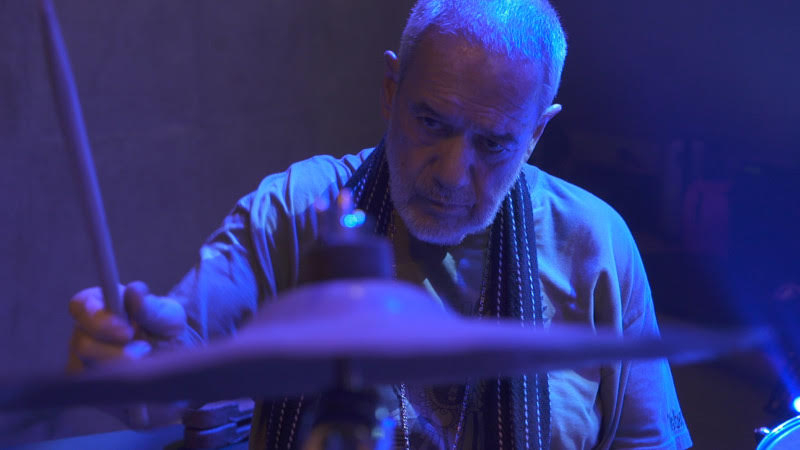 Moreira grew up in Brazil, but in the 1960s came to the United States to follow his wife, bossa nova singer Flora Purim. Djerassi got to know Moreira and her family well by documenting Moreira and Purim’s 1988 return to their native Brazil for his film “Nada Será Como Antes (Nothing Will Be Like Before)”.

But more recently, Djerassi said that due to health issues and other issues, Moreira found himself in a creative lull, going so far as to cancel performances.

Djerassi became personally acquainted with the Preservation Jazz Hall Band and its current creative director Ben Jaffe during the few years he lived in New Orleans, although the first time Djerassi heard their music was here on the Peninsula, when as a child he accompanied his mother to one of the band’s performances at Stanford. More recently, the Preservation Hall touring band, in town to perform at SFJAZZ late last year, did a brief residency at the Djerassi Resident Artists Program, of which Djerassi is a founding director. The program operates from the Djerassi family ranch in Woodside.

Djerassi was inspired to encourage a meeting between the percussionist and the jazz band while attending several evenings of performances by musicians from Preservation Hall in San Francisco presented by SFJAZZ. Each night the band performs with a different guest artist.

“I talked to Ben Jaffe about it, after the third or fourth show at SFJAZZ. I went backstage and I talked to him and I said, ‘Hey, you played with all these different people. As have you ever thought about playing with Airto?'” he said.

Djerassi was able to help organize the meeting of the musicians, scheduled for the morning of Mardi Gras 2017.

Although Mardi Gras draws large crowds to New Orleans to celebrate each year, the holiday, along with Christmas Day, is one of the Preservation Hall Jazz Band’s two days off each year, making it a good day. for a meeting. And Djerassi noted that with the Mardi Gras season already in full swing, Congo Square was particularly quiet that morning as many people slept in after enjoying the festivities the night before. But it wasn’t long before the morning encounter between Moreira and the Preservation Hall musicians turned into a jam session.

“There was hardly anyone there, unless they were still up, because it was really morning, so it was good because there weren’t any crowds – it wasn’t. It wasn’t a show in that sense. It was just like an introduction to each other. And they just started playing, jamming right there,” Djerassi said.

“Resurrection!” documents that first meeting as well as the musicians’ collaborative concert the next day at Preservation Hall, an intimate venue in New Orleans’ French Quarter. Joining Moreira on stage with the Preservation Hall Jazz Band were her daughter, singer Diana Booker, and her husband, percussionist Krishna Booker. The Bookers’ young daughter accompanied them on the trip to New Orleans, making the trip a family affair.

The performance was not only a success, Djerassi said, but it gave Moreira the joy of performing again.

“I call it ‘music as medicine for the soul.’ Because (Preservation Hall) really loved playing with Airto because he’s a legend in jazz circles in percussion, and he loved it because it’s such a fun and uplifting musical ensemble – they’re just amazing from this way. movie ‘Resurrection’ with an exclamation point, because it really has that effect,” Djerassi said.

‘Resurrection! Performances by Airto Moreira and Preservation Hall Jazz Band as part of Cinequest’s “Who We Are, Who We Were” short film program on August 27 at 7:15 p.m. and August 28 at 6:45 p.m. at the Pruneyard Cinema, 1875 S Avenue Bascom, Campbell . For more information, visit cinequest.org.