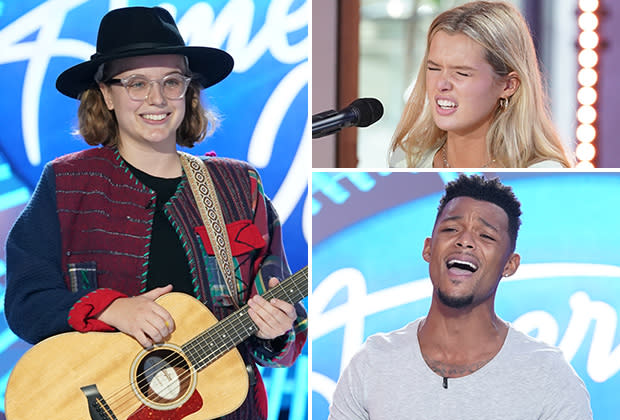 Is it too early to predict that we’ve already found the next one american idol? Because Sunday’s episode, just the second week of the show’s 20th season, definitely featured at least two major contenders.

Let’s start with this week’s Platinum Ticket recipient, 17 Kenedi Anderson, which wowed Katy Perry with a piano reimagining of Lady Gaga’s “Applause.” The performance was heavily promotional, but no truncated tease could have done it justice. Not only did Anderson completely reinvent the song in his own ethereal style, but his voice is absolutely insane and his instincts are perfect. It was a flawless audition and a total no-brainer to send her to Hollywood. The Platinum Ticket was just the icing on the cake.

My other favorite new voice from week 2 belonged to Lea Marlene, a 20-year-old singer-songwriter from — I’m not kidding — Normal, Ill. A former hockey player who apparently hit her head too many times, she oozes personality and showcases a distinctly unique style. Her nervous laugh eventually gave way to a surprisingly gorgeous rendition of One Direction’s “Steal My Girl,” and I was instantly sold. Her voice is so good that Perry squinted. My only complaint is the Catie Turner comparison; Marlene is a completely different vibe. Watch his audition:

Read on for a breakdown of the other Week 2 singers you’ll see in Hollywood:

BETTY MAXWELL, 27 | Known for her impressions of children’s characters, some of which are really good, this former Miss America took the most dramatic route possible with a performance of “A Moment Like This,” Kelly Clarkson’s winning song from Idolthe inaugural season. It was such a wide choice that I was actually prepared to be disappointed, only to be pleasantly surprised by Maxwell’s big voice, over which she showed decent control. Sensing a certain something in her, Perry asked Maxwell to sing a country song, and she chose Carrie Underwood’s “Jesus Take the Wheel” – a good choice, though it raises the question of whether Maxwell only knows songs published by Idol winners. The consensus among the judges was that Maxwell had a tendency to go too big, so she’ll have to contain it, but even Luke Bryan acknowledged she had “a lot to work with.” It’s not nothing. Click here to watch.

MIKE PARKER, 27 | This next audition went like, well, “Strawberry Wine.” The Virginia-based carpenter imbued his beautiful, sweet rendition of Deana Carter’s country ballad with genuine emotion, which he conveyed without being overly showy. The judges appreciated this, Lionel Richie stressing that “simplicity is king”. Perry also ranked Parker in the Top 24, which was… oddly specific. Click here to watch.

KELSIE DOLIN, 18 | From the moment the Sufjan Stevens song started playing in the background, I knew this young woman was going to have a sad story — and she never did. Dolin’s grandparents basically adopted her and her sister, who was born addicted to opioids “and all kinds of crap,” before the state could take them away. She dedicated her rendition of Clarkson’s “Piece by Piece” to the memory of her grandmother, a perfect piece for Dolin’s pure, innocent sound. During a follow-up performance of Adele’s “When We Were Young,” the judges tried to convince Dolin to give them more power, a challenge she did well enough to bring Richie to tears. Look:

LUKE TAYLOR, 20 | Not since Scotty McCreery Idol gave us such a low voice. Johnny Cash’s “Ring of Fire”, sung even lower than the original, was an unsurprising choice. The real surprise here… is that he got away with it. Don’t get me wrong, the guy has potential, but where was the excitement? Perry hasn’t been sold, but with yeses from Richie and Bryan, this booming bass will live to sing another day. Click here to watch.

AARON WESTBERRY, 20 | The judges saw heartbreaking potential in this laid-back grocer based on his raw performance of Sam Hunt’s “2016.” Perry wasn’t wrong when she said he exudes Owen Wilson energy. He was by far the coolest contestant of the night, with a voice that makes you melt. No crazy range needed. It was also extremely appropriate for Owl City to perform as they walked out of the audition room – that’s exactly the vibe I get from him. Click here to watch.

ALLEGRA MILES, 18 | We didn’t spend too much time with Miles, but I’m convinced only by the judges’ impressions. A talented songwriter with a beautiful voice, she’s someone I can’t wait to see again in Hollywood. Click here to watch.

CHRISTIAN GUARDINO, 21 YEARS OLD | No one expected the soul that escaped from this man’s mouth tonight. Flip-up glasses, a gold chain and ripped jeans, Guardino completely blindsided the judges with a beautiful rendition of Donny Hathaway’s “A Song For You.” His mom should be very proud. Click here to watch.

LADY K, 25 | As always, one of the most powerful auditions was held until the end of the evening. Fueled by a desire to give her family something to get excited about after her brother’s tragic suicide, Lady K’s performance of Perry’s “Wide Awake” was so good that the singer herself started the reviews with a single. “How dare you?” Lady K was clearly living those words, and the emotions were ringing loud and clear. You can’t help but support her. Look:

Who was your favorite singer from week 2? Vote below, then leave a comment with more of your thoughts.

The best of TVLine