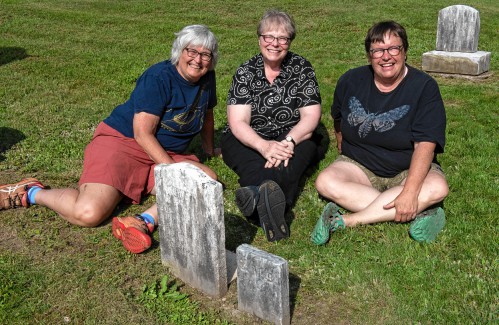 HATFIELD – When Liz Denny and Julie Pokela decided to clean up an overgrown section of their lawn last year so they could install a gazebo there, little did they know they would discover a small piece of local history.

Now, months later, their discovery has led to the creation of a song, “Alice,” which honors a young girl who died in 1863, recalls the loss of young local men in the American Civil War, and recounts the memory of a mother. of her child.

A video with the song will be posted on a blog on the Hatfield Historical Society website in honor of Memorial Day.

The song, which has lyrics by Pokela and is composed and sung by Justina Golden, a longtime vocal music teacher in the area, follows research Denny and Pokela have done to try and uncover the stone’s origins. worn gravestone, which they found buried under a layer of dirt and leaves in the backyard of their King Street home with a single legible word on it: “Alice”.

The couple sought help from Hatfield town officials and registries, investigated online ancestry sites and consulted local newspapers from more than 150 years ago to learn more about their mysterious discovery. They were well placed to do the job: they previously ran Market Street Research in Northampton, then sold the business a few years ago and retired to Hatfield.

“My first thought when I came across [the gravestone] was “I hope there isn’t a real child buried there,” Denny said. “And when I look back on it now, I’m amazed to think that we got to know as much as we did.”

With the help of Joe Lavallee of the Hatfield Cemetery Commission, the couple learned that the headstone was that of a girl named Alice G. Bolter, who died in March 1863 a few months after her second birthday. Their backyard is not an actual burial site, Pokela and Denny say, and it’s unclear why the stone was placed there.

The Bolter family, living in an unknown location in Hatfield at the time, later moved to Amherst and in 1899 they placed a second headstone in Alice’s memory at Hatfield’s West Street Cemetery, located on Roads 5 and 10.

Pokela, who plays guitar and writes songs, says she wanted to write a song about Alice soon enough, especially after Denny got to know more about the Bolter family.

“The fact that she died in 1863, when young men from Hatfield were fighting and dying in the Civil War, really stuck with me,” Pokela said.

She was particularly struck by a phrase on the girl’s tombstone in 1899: “The Lord needs her.” She wondered what reasons the parents might have for thinking that the Lord needed their young daughter. Eventually, Pokela said, she imagined the toddler comforting the young soldiers in that area killed in the Civil War, so she incorporated that idea into her song.

In “Alice,” a soft folksy tune built around minor chords played on acoustic guitar, Pokela also explores the historic barrier the Connecticut River posed to the early inhabitants of Hatfield when the town was part of Hadley and the only church in the community was located in Hadley; the people on the west side of the river eventually founded their own town with its own church.

In the song, which Pokela imagines being sung by Alice’s mother as a now elderly woman thinking back to her daughter’s death, the river becomes a metaphorical barrier as well as a physical one. The opening chorus of “Alice” includes the lines “I can’t cross the river, the river is wide / And the bridge to heaven is closed on my side.”

But the chorus later changes as the elderly singer plans to cross the river to join Alice and the dead Civil War soldiers in paradise.

Pokela says she regularly shares lyrics to her songs with Justina Golden, who is a friend as well as a vocal teacher and singer, and she did so with the lyrics to “Alice.” Golden then came up with a melody and arrangement for the song (and did some lyrical trim) and added lead and harmony vocals and finger guitar. A small second guitar part is played by Bob Castellano.

“I’m really thrilled with how it all came together,” Pokela said.

She and Denny also note that none of this could have happened without the pandemic. They wanted to have a gazebo in their backyard where friends and family could safely gather, so they cleared overgrown grass and shrubs to accommodate the structure. After getting their gazebo last summer, they were putting it away for the winter, and it was when Denny was raking and cleaning the area in October that they discovered the old headstone.

Pokela says she and Golden also plan to add violin to the recording of “Alice” a bit further down the road to give the song “even more of a Civil War feel.” And at one point, Pokela added, “We’ll see a live performance.”

Steve Pfarrer can be contacted at spfarrer@gazettenet.com.