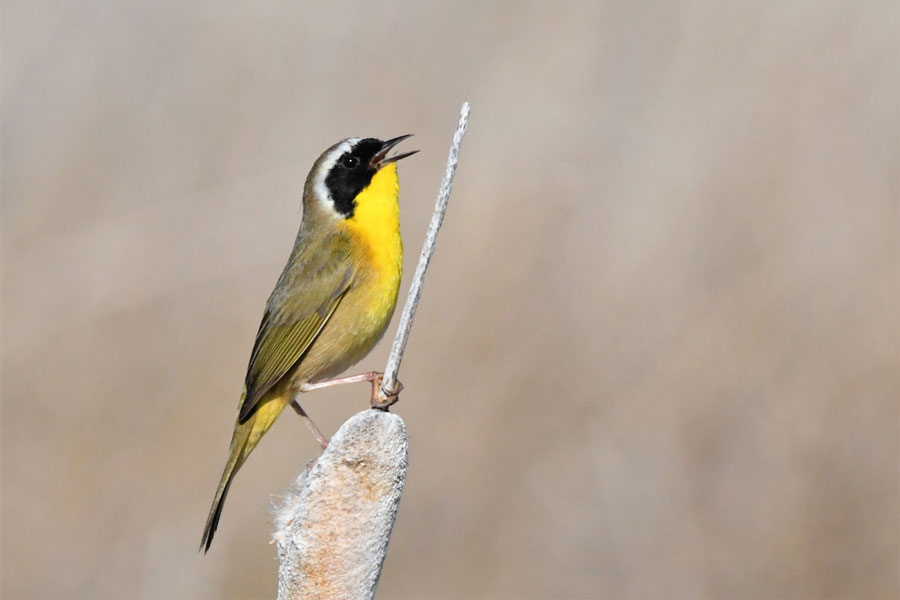 After a three week absence, I finally convinced my doctor to let me slip away to Market Lake to see what I could find. As I drove slowly along the canal leading to the main marshes of the management area, I heard the tell-tell sound; ‘wickedness – wickedness – wickedness’, male common yellowthroats, members of the warbler family.

This is the middle of their encounter period with the males who scour the stocks of dried cattails in search of a female to impress.

Each time a female showed up, three or four males sped towards her, and she disappeared into the thick tangled reeds of the previous year’s growth. Sometimes one of the males would perch on a cattail to sing his love song before being attacked by other males.

Sometimes I heard rustling in the vegetation near my truck door, only to briefly see a female as a male would have seen her before. During the hour that I watched them, I couldn’t take a female photo because they were moving very fast. In the meantime, the females will build a nest and choose their mate and their world will slow down. Encounter is such an intensive sport for everyone, but especially for birds.

Soon she will start laying three to six eggs and begin to incubate them, the male will gather insects to feed her while she keeps the eggs warm. Incubation is very short for the Common Yellowthroat, only about 12 days, and about ten days after hatching the young will leave the nest and the adults will likely raise another brood.

These little warblers act a bit like wrens with their restlessness and curiosity. The males, also known as “yellow bandits” because of their black Lone Ranger facial patch, will approach a parked car and sing for the occupants. But it is amazing how a bright yellow bird can hide in the dry vegetation where it lives.

Last fall, the Idaho Department of Fish and Game burned down some of the vast expanses of Market Lake cattails along the road that skirts ponds where common yellowthroats have nested in the past. This caused these birds to occupy breeding grounds in a small line of cattails west of the road from the new outhouse near the first pond. This caused them to be closer to the road than in previous years.

A good way to find them is to drive slowly down the road, listening for the calls of men or looking for fast yellow lightning bolts flying through the cattails. If you park near where you see or hear them and wait a few minutes, the males will soon approach you and may even serenade you with their beautiful song. They put on quite a show.

By the way, it’s time to start bringing out the halved oranges to attract fruit-eating birds like Bullock’s orioles, western tanagers and hummingbirds. Fruit-eating birds are also attracted to hummingbird nectar. Rare songbirds have also appeared at Mud Lake and Market Lake.

Work is still underway at the Camas National Bird Refuge, but manager Brian Wehausen told me that some of the songbirds were in the cottonwoods near the headquarters. Now is the time to observe fruit-eating songbirds.