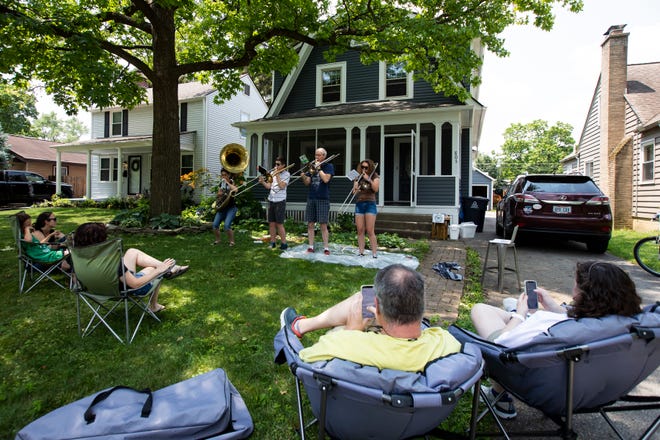 A residential street in Bexley was buzzing with sounds on a recent summer afternoon: a lawn mower was chopping, cars speeding by, children screaming in glee, and a trombone sounded the tune of “Faith” by George Michaels.

Make that three paperclips and a sousaphone.

Brass band WesterHornz – made up of the four members of the Westergaard family – was on the scene again, hosting one of their ‘lawn certs’ which have become a neighborhood staple since the family moved from California there. six months ago.

A dozen spectators were seated in folding chairs in the Westergaards’ front yard for the show, while a handful of passers-by walked the dog or strolled stopping to listen to the bass tones of brass, like “Hello” or ” Let it Go “from Disney’s” Frozen “.

The audience applauded as the horns ended their set with an energetic rendition of “Happy” by Pharrell Williams.

â€œEveryone has a chance to shine overall,â€ said neighbor Kris Armstrong, who has heard the group perform several times. “It’s fun to see them do it together as a family.”

Although the members of the Westgaard family – parents Rob and Deb and teenagers Gracie and Jack – have a long history in music, it took the pandemic for them to form their family group which enjoys sharing puns as much as they do good music.

Living in California when the coronavirus shut everything down, Rob and Deb – who met as part of the University of California Davis marching band – wanted to find better opportunities for their children to play their instruments in a different way. only during a Zoom lesson or rehearsal.

â€œThey weren’t doing any kind of gambling during COVID,â€ Rob said. â€œDeb and I were frustrated that we didn’t have a musical outlet when it was so important to them. So we created one for them.

It turns out that meant creating a family group.

Initially, the quartet simply performed songs together, sort of creating silly music videos to post on YouTube. However, it wasn’t until they moved to Bexley in January that the WesterHornz performed to a live audience.

â€œDeb coined the term ‘Lawncert’ and people asked us to come and play on their lawn – socially remote, but we could still play,â€ said Rob, 53, who works in database software development. “It was a great icebreaker and we got to meet people in town.”

They’ve performed a dozen times since, including a tour of the house and garden in Bexley, an annual July 4th block party and several birthdays.

Armstrong and his wife, Gretchen, “hired” the Westergaards to play their July 4th night. (The group donates the money to charities.)

â€œThey added to the festive nature,â€ said Kris Armstrong. “With the marching bands and the Fourth of July, one usually thinks of the Sousa marches, but they brought a whimsical aspect to the gathering.”

His wife added, “They also had this funny joke with each other.”

Outside their blue house on July 18, Rob and Jack, 13, took turns pranking the small group gathered to hear them play. Gracie rolled her eyes as Deb – the 53-year-old sousaphone player – said: “The apple doesn’t fall from the tree.”

Gracie, 17, and Jack couldn’t be more grateful for the sheer joy of playing the trombone in a band with their parents during this difficult year.

â€œIt was really bad when we couldn’t play,â€ said Jack, an eighth-grader at Bexley Middle School. “It gave me something to look forward to.”

For Gracie, a new freshman at Capital University who plans to study music, WesterHornz has given her a sense of normalcy.

â€œIt allows us to train,â€ she said. “We can pretend that everything is normal.”

Now that the band has a growing catalog of songs they can play, they usually train together a few times a week.

Rob takes care of the arrangement, which poses unique challenges not only for writing music for low-brass instruments that don’t often play the melody, but also for various skill levels. He and Deb have been playing for over 35 years, while their son is only in college.

The two Westergaards teenagers have made great strides in their musical abilities and gained confidence through the experience of the family group, their mother said.

â€œI was so impressed with the way they play,â€ said Deb, who usually books concerts. â€œWhen I was their age, if I had to do it, I would have vomited. They are so exposed.

In an ensemble as small as a quartet, the mistakes are not hidden and everyone should have the same weight, she continued. Jack said he’s always a little nervous, but playing in front of other people just feels more natural now.

Plus, Jack likes to play the melody for once.

Her sister added, “We can’t play this music anywhereâ€¦ that’s why I like to play with the band.”

Henry Heckler, who lives nearby, couldn’t help but beam when the WesterHornz performed “Happy Birthday” for him at a recent concert – it was his seventh birthday that day.

Gracie is an instructor at a summer camp he attends, so he wanted to find out about his group. His mother was happy to help.

â€œThey are awesome and so talented,â€ said Mary Heckler. “They keep giving with their fundraising, and they are so generous to play this music.”

That afternoon, the family was raising money for the St. Baldrick’s Foundation to support cancer research – each member participating in the head shave promoted by the organization – and a short 30-minute lawn certificate seemed like a great way to bring the community together for the cause. .

Gracie said she loved the way their music could make people smile, adding that the two young girls who live next door always clap when they play “Let it Go”.

â€œIt’s nice to have this different bond with the neighbors,â€ she said. “It’s good that they like it. “