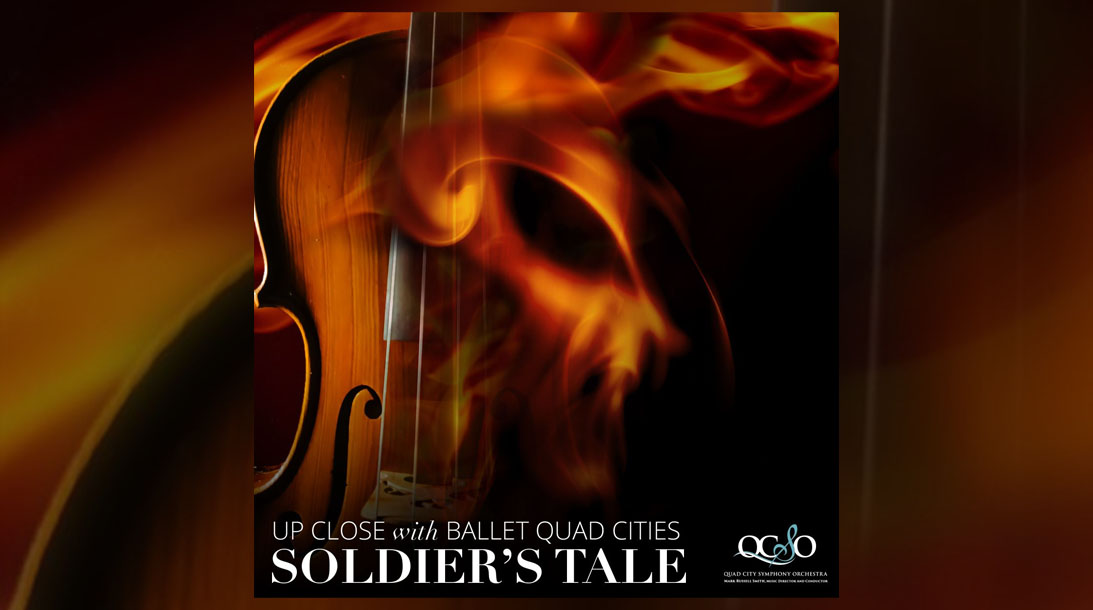 A unique cultural event will take place on Saturday October 9 at 7:30 p.m., as dancers from Ballet Quad Cities join forces with musicians from Quad City Symphony Orchestra on a bill with three works of the twentieth century.

The entire group reunites to perform the influential and rhythmic ballet by Igor Stravinsky The soldier’s tale (1918), which depicts the timeless story of a young soldier who makes a pact with the Devil. Join the musicians for a pre-intermission listening guide to learn more about this captivating work.

This special concert has lasted for more than two years, since QCSO Executive Director Brian Baxter and concertmaster Naha Greenholtz contacted BQC Artistic Director Courtney Lyon to stage the dramatic “The Soldier’s Story” ( “The Soldier’s Tale”). . It includes Greenholtz on violin, Won on clarinet, Coelho on bassoon, Scholl on bass, Matthew Onstad on trumpet, Michael Cox on trombone and Tony Oliver on percussion.

It will be danced by Nicholas Bartolotti (Soldier), Christian Knopp (Devil) and Sierra DeYoung (Princess).

“They’ve never done that with dance before,” said Lyon (who choreographed both pieces) of the QCSO playing the hour-long “Soldier’s Tale”. “When it comes to the dance world, Soldier’s Tale isn’t necessarily something that people know, like The Nutcracker. It is not such a well-known story, even if it is about Stravinsky – who has done some of the most famous ballets in the world – “The Firebird”, “The Rite of Spring”.

“So it’s a really unique experience for me and for us,” she said, noting the thrill of merging speech, music and dance.

“We really want to honor the value of this unique thing – these three different art forms brought together on stage; it’s very special, ”said Lyon.

Compared to traditional (wordless) ballet, it may be easier for the audience to follow the story, with a narrator, Shelley Cooper, who is a seasoned singer and actress.

“They will find it more useful,” said Lyon. “It was just a different way for me to work. When I choreograph a ballet, it’s a narration. Of course, I make sure what I’m doing matches the music, but I make sure the narration is really clear to the audience.

“So now with the storytelling with this text, it’s so cool because it’s just added elements,” she said. “It’s a different rhythm, it has a really specific meaning. When I did the choreography, I used this text, to use this voice. It was like, you can always use your imagination. I feel like it takes you to another place yet.

“Soldier’s Tale” is the Faustian story of a young soldier who makes a pact with the Devil. Walking down a lonely road, the soldier stops to play the violin and the devil (in disguise) listens. Approaching the young soldier, the Devil offers him a profession: the violin for a book that can predict the future.

The Devil suggests a three-day exchange, and finally the soldier gives in. Of course, the Devil deceived the young man; when he returns to his village, everyone is terrified of him because they think he is a ghost. It’s actually been three years, not three days. The Devil appears as an old woman selling goods, including the violin. The soldier repurchases his instrument, but he no longer plays. He throws down the violin and tears up the book that predicts the future.

The second half of the drama unfolds with the soldier hearing about a sleeping princess; the king offered his hand in marriage to anyone who could wake her up.

“I love it. It’s so cool,” Lyon said. “It’s really a sparse score. It was written in the 1960s, originally to go on tour for Benny Goodman. It’s eight. short pieces of music that all have a different feel.

The unique nature of the evening will be more special with guest conductor Kyle Knox who is married to Naha Greenholtz. Formerly a clarinetist with the Milwaukee Symphony, Santa Fe Opera and the Philadelphia Orchestras, Knox is now Music Director of the Wisconsin Youth Symphony Orchestras and Associate Conductor of the Madison Symphony Orchestra.

“He’s just a really big fan of art,” Lyon said of Knox. “He is very excited to organize this event. He has previously directed “The Soldier’s Tale”. So he came over to our studio last week so that we could give it a try, you know, check the tempos and the direction and he was just thrilled. He was like, it’s awesome.

The added performance is an extra layer of responsibility for the dancers, on top of their regular season performance and school outreach.

“It keeps them on their toes for sure, pun intended,” said Lyon. “And for the dancers, it’s like a bonus opportunity, because it stretches them by stretching them in a new way. Everything we do that is a little different is just a really cool opportunity to grow as an artist.

“So what’s happening in the Quad Cities, it’s pretty rare for this event to happen especially around this time,” she said. “But to have these three arts together on stage. So the dancers are really respectful. They think it’s great and they’ve done extra work. They also had to do a little more work on their own outside of the dance studio, to really understand the context of the story, read the story, listen to the music.

This week, Ballet Quad Cities is also presenting “Dorothy Goes to Oz” for all elementary students in the Pleasant Valley School District. October is Bullying Prevention Month and the district has partnered with BQC to create a program that “supports the most unlikely friendships presented in the history of The Wizard of Oz,” the door said on Wednesday. district word, Beth Marsoun.

“The students who saw the first performance were just captivated. We are very proud of this partnership to help our students learn about humanity through the arts, ”she said. The ballet’s new version of the tale “Oz” premiered outdoors on September 12 at the Outing Club in Davenport.

Face coverings will be universally required for all QCSO indoor concerts as long as community transmission remains significant or high in both counties or Scott and Rock Island counties depending on theCDC COVID Data Tracker. Once transmission rates become moderate or low in Scott and Rock Island counties depending onCDC COVID Data Tracker, masks will be optional for people who have been vaccinated and highly recommended for people who have not been vaccinated. Face coverings should be worn properly, covering the nose and mouth. Customers arriving without a suitable face cover will receive a disposable face mask.

Tickets for the Saturday program cost $ 25 each for adults and $ 10 for students, with a $ 25 option for home live streaming and digital access. The link to the Live Stream and your personal access code will be included in your ticket purchase confirmation email.

While the QCSO made several Masterworks concerts sold out last season available online for 30 days, the first weekend last (with pianist Garrick Ohlsson) was not. Digital access depends on the overall cost and the agreement with the musicians, QCSO spokesperson Caitlin Bishop said.

“We saw increased engagement for our chamber music series last year (formerly known as Signature Series) and we plan to provide live streaming + digital access for all Up Close series performances. this year, ”she said via email of the new name. for the QCSO chamber series.

For tickets and more information visit qcso.org. You can see a schedule for this fall season (soldier history information begins on p. 19) HERE.