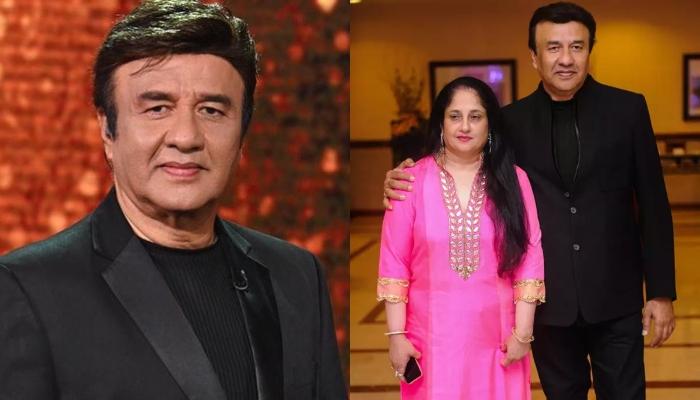 Popular host, Maniesh Paul has launched his new podcast, The Maniesh Paul Podcast, and he has invited several celebrities and entertained his fans with his funny podcasts. Popular Tinseltown celebrities including Bharti Singh, Eli Avram and Prajakta Koli spoke candidly about their lives and shared untold stories about them. Now famous musical director and singer, Anu Malik has appeared on the entertaining podcast.

For the uninitiated, the award-winning singer, Anu Malik had married his beloved wife, Anjali Vasudev Bhat popularly known as Anju. They are the proud parents of their two daughters, Anmol Malik and Ada Malik. Although Anu’s family stays away from the media, they are often spotted together at airports and at parties.

In the latest episode of The Maniesh Paul podcast, Anu Malik spoke candidly about his career in the Indian music industry and explained how he started his journey in 1977. Anu Malik also revealed if he considered retirement an option , and mentioned that a person’s ultimate goal should be to win, eat, work and repeat. He also talked about his cult songs and his equation with other music composers of his time.

During one of the segments of the video, Anu Malik talked about the incident that inspired him to compose his greatest hit, Ek Garam Chai Ki Pyali Ho. Speaking about the same, he shared that it was his wife, Anju, who helped him create this song. He remembered that one morning, Anju came to wake him up with a cup of tea, and she was stirring the spoon in the cup and the rhythmic sound helped him to do the chorus. You can hear him say:

“In the morning, my wife comes to me and I sleep. She comes to me to hand me tea, and she had a spoon in her hand. She didn’t say ‘Anu get up’ instead she started to stir the cup. Then slowly she brought it to my ears and said: ‘you asked me to wake you up na?’ I could hear the sound of the spoon, slow and musical, I heard a sweet sound, and I also got the aroma of tea. And then suddenly it came to my mind, and I woke up , and I looked at my wife. I said to her, Ek garam chai ki pyali ho, koi usko pilane wali ho’, and she smiled.”

A few years ago, in an interview with Hindustan Times Brunch, Anu Malik spoke about his wife, Anju Anu Malik. The singer recalled an interesting incident from his teenage years and shared that he composed a song for his wife. Speaking of the same, Anu had said:

“My wife Anju and I got married when I was 22 and she was 21. It was after a long and emotional courtship at Mithibai College. I used to follow Anju, and one day she complained to the college principal. I was so scared that I fled to Khandala! It was raining and I composed the song Dekho Baarish Ho Rahi Hai for my lady.”

On the work side, Anu Malik had composed the song, Barsat Ki Dhun in 2021.

Next Read: Dimpy Ganguly Opens Up About Her Difficult Past, Reveals How Her Husband, Rohit Helped Her Overcome Her Fears

AWESOME NEWS! Now you can download BollywoodShaadis app and never miss a story. Get the app

AWESOME NEWS! Now you can download BollywoodShaadis app and never miss a story. Choose your device android or iOS (Apple)