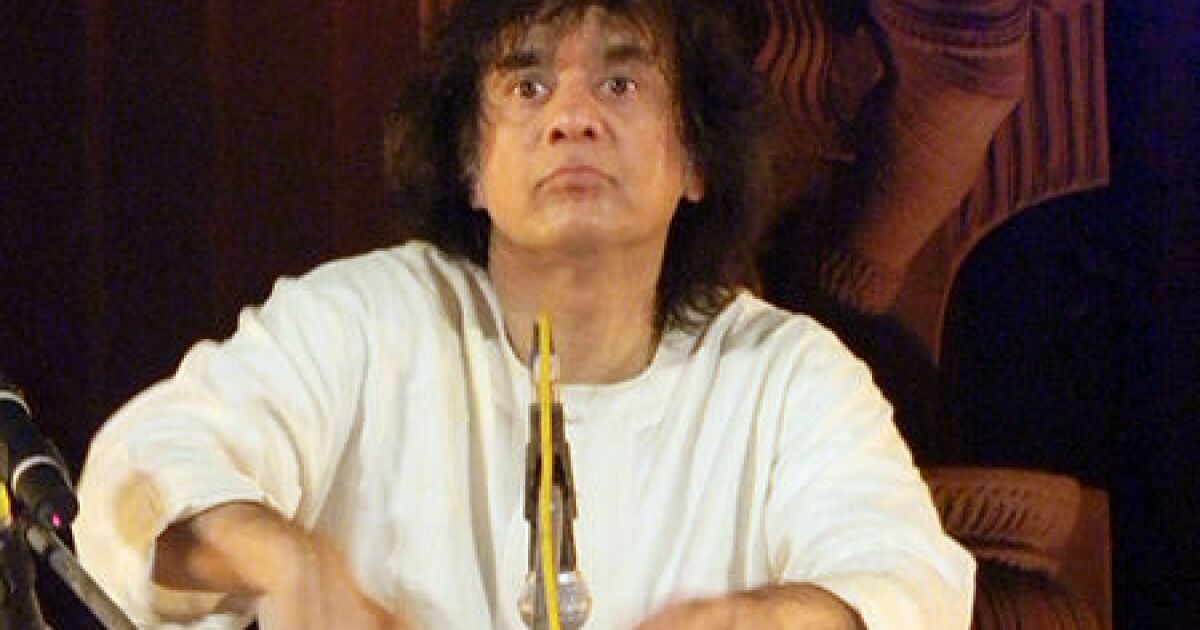 Hussain, 71, was born in the battery. His father, Alla Rakha, was a master tabla player. He often accompanied sitar legend Ravi Shankar and helped popularize Indian music around the world with appearances at the Monterey Pop Festival in 1967 and Woodstock in 1969. Late at night, Alla Rakha would wake a young Hussain and taught not only the intricate, intertwining rhythms of the tabla, but the stories behind the music.

HUSSAIN: As with all forms of music that rely on improvisation – so that means creativity on the spot, spontaneity – it has a lot to do with an expressive element, and it comes from visualizing the repertoire you represent . So if I play a particular passage – I think Leonard Bernstein also demonstrated this once, when in one of his lectures with his orchestra he pointed out how a certain passage was actually a visualization of a herd of deer running. We visualize in our mind when we play a particular rhythmic phrase or a pattern or a whole passage of what it shows, what it tells, whether it’s a conversation between husband and wife, a battle between two warriors, you know , something like that , it’s in our head and we visualize it. So that plays a very important role in our performance, and the technical ability has to be at an optimal level to be able to express yourself spontaneously, or tell the story spontaneously, because every time you tell a story, there’s going to be having a little gap here and there would bring out some other aspects of the story that it didn’t the last time you told this same story.

Hussain quickly launches into the tabla and gives his first concert at 7 years old. At 11, he was on the road and at 19 Shankar chose him as an accompanist for an American tour in 1970. He chose to stay in the United States to work. with master sarod Ali Akbar Khan in the Bay Area. Throughout his long and prolific career, Hussain follows a holistic approach to how he improvises with his musical partners.

HUSSAIN: We do not repeat. Not even in the locker room or even in a sound check. But there are jokes between us. We talk about our cell phones or the news or the family or the food we just had for lunch, etc., etc. we’re a little anxious or nervous or sad or whatever. And when all of that happens, you’ll take all of that information onstage with you. And then in this musical conversation, it’s going to start… Everything that happened during the day is going to be crossed. But instead of saying words, you’ll be talking about melody and rhythm. So all these jokes and all this is part of our preparation for the concert. It’s not just about shooting the breeze, it’s about getting to know each other better. I mean, people ask me, what are you looking for when playing with an artist? For me, I seek continuity. I am looking for a relationship that has been built over a period of time and has many layers. Like, okay, if I play with John McLaughlin, or with, say, Béla Fleck, or Edgar Meyer or whoever it is, or Charles Lloyd or whoever, and Indian musicians, the relationship has been built over the decades. And we know each other, inside and out, our families know each other, we helped each other through different points, we exchanged recipes, we exchanged ideas on where I should go from their women, to get a wedding dress for my daughter- You know, stuff like that. I mean, so we know each other inside and out, we know each other’s political beliefs, we know what we like and dislike, what we read, what we watch, whatever, and when you go on stage, all of this plays a very important role in participating in the musical conversation that we are going to have.

One of Hussain’s closest musical compatriots is Grateful Dead drummer Mickey Hart. Friends and co-conspirators for five decades, the duo released their “Sound Consciousness: Drones for Sonic Bathing” project last year. Hussain says they are gearing up to bring their Planet Drum project – first launched in 1991 – back to the stage for a May Dayst concert in Stanford, California with Bobby Weir, followed by a new album and possibly a tour later this year or early next.

HUSSAIN: Mickey and I, our main reason for this is, of course, to let the world know that centuries ago the drum was an important part of the culture of the country wherever it was, and the drum was in fact the guide and a process of transmission, a process of telegraphing, a process of meditation, learning and centering. And it was a very important part of the daily life of the world. And then that changed when the church decided to go the other way, and the beat went and the melody took over and the choirs emerged and a very heavenly sound came from that part of the world and has taken over the world for centuries. We think the whole idea of ​​bringing the spotlight back to the beat is where we are in our heads. This is our priority. Our priority is rhythm. It’s the beat, silly. It’s basically what we say to ourselves: it’s the rhythm, stupid. And rhythm rules our lives and directs our planet. There is a rotational tempo according to which the planet revolves around its axis, and therefore, which defines the tempos of all our rhythms at which we all function in the pulse. And Mickey and I strongly believe in that, and we’ve always followed that doctrine. And that’s what has held us together, is that, to seek the central rhythm of our beings, our earth, our planet and our universe. And we’re still striving to try to do that and hope the search never ends, because that’s what it’s all about. It’s always about the journey, not the goal.

While devoting his life to discovering the ultimate rhythm at the core of existence seems like a daunting task, Hussain says pleasure is everything to him.

HUSSAIN: You see, we are all students. We are learning. And so because we’re learning, I don’t see it as a responsibility, I see it as a privilege, as something that’s a serendipity, because we love doing that. It’s like being in the greatest park ever and finding these amazing rhythmic, rhythm toy-like traditions that we love to experience and enjoy and interact with and find a voice, a language that isn’t based on what you could call a grammar of the kind imposed on us by the introduction of languages. But it’s a universal grammar, it’s a universal statement, it’s a universal thought process that is in place, has always been in place, and now, over the past three or four decades, has been rediscovered. And happiness is supreme.

Zakir Hussain appears with Kala Ramnath and Jayanthi Kumaresh at The Egg in Albany on Sunday.