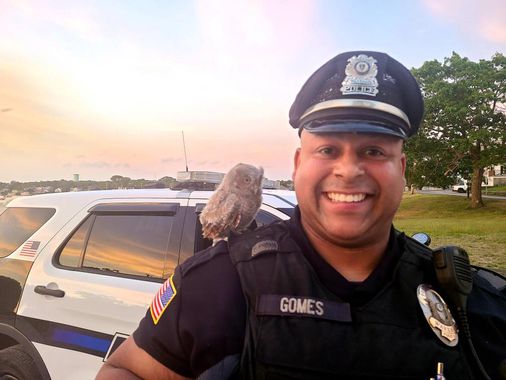 Every day, police respond to reports of all kinds of events and non-events, most of which never make the news. Here is a sample of lesser-known – but no less remarkable – incidents from police logbooks (aka blotters) in our suburbs.

On the evening of June 9, a person was walking a dog in Wareham I met a young owl by the side of the road in Onset. The bird was unable to fly, and concerned for its safety, the Good Samaritan notified a nearby Wareham police officer. Constable Ryan Gomes managed to get the little owl off the road and notified the Wareham Department of Natural Resources. It was getting dark outside and the owl ended up spending the evening with a natural resources officer.

The next morning, the natural resources officer began to examine the trees in this area and found a few potential nesting sites where the bird might have come from. At this point, Acting Fire Chief Jeffrey Osswald stepped in to help reunite the owl with its mother. Using a bucket truck, the fire department guided the natural resources officer through the branches of the trees, where he was met face to face with the mother owl. “The unharmed owl has been safely reunited with mom in the nest,” officials wrote on Facebook. “The officer tried to get the mother owl’s name but she kept answering who.?.?”

Balloons are meant to be festive, but sometimes they can cause problems. Concrete example: at 12:21 p.m. on June 5, Wilmington police received a report that balloons made contact with wires in Town Park and caused sparks and arcs. Firefighters and the reading light service intervened on the scene to remedy the situation. Another balloon-related call arrived at 5:13 a.m. on June 8, when Marble head police received a call about an audible alarm sounding in the Atlantic Avenue area. Police spoke to someone from the alarm company who said balloons set off the alarm. An employee came to the store and silenced the alarm.

At 9:17 a.m. on June 17, Bridgewater police received a 911 call from a South Street resident who complained that his neighbor had been playing drums for three days. Police later tweeted that it was in fact a misunderstanding and that “the noise seems to come from the construction site of the school”.

Singing is supposed to sound great, but sometimes a person’s song can be mistaken for something else. This is apparently what happened at 8:38 pm on April 14; Norwood police received a call from a concerned person about a man who was parked with his lights on and “singing loudly” at the MBTA suburban station on Broadway. According to the newspaper entry, “the officers spoke to him, he checked OK.”

A similar call arrived at 12:23 am on May 21, when Saugus police received a call reporting a man in a gray sweatshirt walking north on the south side of Route 1 who appeared to be in distress. Officers located the man and spoke to him; they determined that he was fine and that he was “just going for a walk and singing” and that he did not need any help.

And one last example: at 6:17 a.m. on June 20, Peabody police checked on a woman who allegedly “cried aloud” on Saint Lo Drive. The diary entry stated that an officer had checked on the woman, who was perfectly fine and “was just singing a song.”

CALLS OF THE WILD LIFE

The city of Wilmington has had some interesting animal calls lately. First there was a bearded dragon that had to be rescued from a storm sewer near the college on May 12, and then the animal control officer found a loose chicken on Agostino Drive on May 28. A few days later, on June 3, a turtle needed help crossing the street onto Glen Road, then the next day the animal control officer responded to a house that appeared to have baby raccoons living in the area. fireplace. Finally, on June 10, someone from Salem Street called to report that a rooster was attacking his window. The expedition contacted the owner of the rooster, who came and collected the bird.